Last evening Delhiites saw the handsome Ashmit Patel and Bhavesh Kumar at the launch of Famesky Productions forth coming web series “Delhi weds Haryana”. All set to go on floors soon, the series deals with marriages between two cultures in the north itself. Directed by Saurabh Sharma and produced by Niren Dabas and Sandeep Bhardwaj, shooting of this interesting series will be conducted in Delhi, Haryana and India’s Pink City Jaipur.

Speaking at the launch, Ashmit Patel made some surprising revelations. Talking about the series, Ashmit said, “I'm excited to work with Saurabh Sharma who is debuting on the digital platform with this series. I am playing the elder brother of Bhavesh Kumar whose marriage creates all the confusion. While he is playing a wedding planner in the series, I’m playing a divorce lawyer in contrast. It will be real fun doing this series.”

Sandeep Bhardwaj who is producing this series with Niren Dabas is upbeat about this interesting concept penned by Niren Dabas as he is all set to bring in the Haryanvi humour, characters and dialect that is quite popular amongst the masses. “Contrasting a rustic earthy life in the villages with that of the city, it will be showcasing the rich culture of Haryana.” 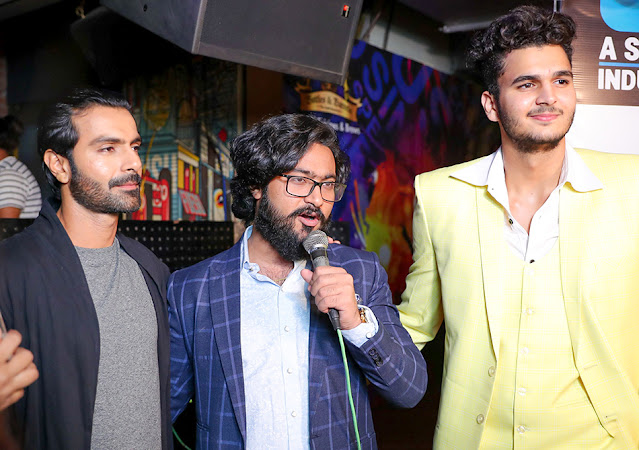 Bhavesh Kumar who was looking dapper in a suit says, “It is an interesting role of a city bred boy who gets married to a Haryanvi village girl and that’s where the chaos starts. It’s a comedy of errors punctuated with the flavor of Haryanvi language. I’m sure audience will love it.”

“High on drama, comedy and romance, I was fascinated with the perspective of the narrative when Nirenji first discussed the idea. It is a cool contrast of a poignant village life unlike Delhi’s enchanting smorgasbord of a myriad cultures and social life,” said director Saurabh Sharma.

Apart from Ashmit Patel and Bhavesh Kumar, Sunil Chitkara, Manya Pathak, Shaloo Jindal and others attended the launch function. Roshni Sahota who is based in Mumbai could not make it to the launch.