BIFF Mumbai to be held at from November 27th-29th, 2022 at Carnival Cinemas Oshiwara 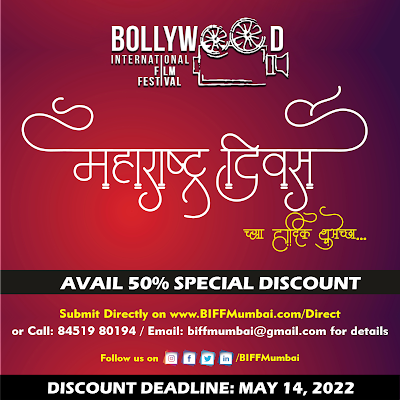 The Bollywood International Film Festival (BIFF Mumbai) is one of Mumbai’s premier Independent Film Festival. Showcasing a rich assortment of entertaining and thought provoking Indian and global independent new cinema along with masterclasses, panel discussions and industry events, it is founded by Actor Yashpal Sharma and his Writer/ Director wife Pratibha Sharma.

An active platform for independent filmmakers to showcase their work and earn accolades internationally for unparalleled storytelling and performance; the festival aims at providing a common platform for the cinemas of the world to project the excellence of the film art; contributing to the understanding and appreciation of film cultures of different nations in the context of their social and cultural ethos; and promoting friendship and cooperation among people of the world.

Gearing to give its 3rd edition a big kick start and aiming to be bigger and better than its prior avatars, the BIFF Mumbai platform is sure to reach more boundaries than its previous editions. Owing to its valuable contribution in bringing the platform to film buffs and Cinephiles, BIFF Mumbai has garnered the support of Carnival Cinemas this year. To be held from November 27th-29th, 2022 at Carnival Cinemas Oshiwara, movie lovers will have a chance to see a wide range of cutting-edge feature length films, short films and documentaries including opening and closing with world premieres of successful features.

According to the CEO & Festival Founder Pratibha Sharma, “All efforts are being made to host the international film festival on a major scale where people can watch award-winning movies on one platform. The festival will be a star-studded event, with several contemporary actors and directors expected to attend, apart from film enthusiasts.”

Right now, the early bird deadline is on and entries for the festival have already started. To motivate the submitters, the organisers are offering a straight 50% discount to the film makers and students. However, to avail the offer, one has to submit their films before 14th May. Those interested can register themselves through www.biffmumbai.com/direct