After months of planning for an impressive festival line-up, the team at Awam ka Cinema that organises the Ayodhya Film Festival announced this morning that the event, scheduled to happen from 15-17 November 2019, has been postponed. This call has been taken in view of the impending law and order situation that might arise due to the Ayodhya verdict which may come sometime the same period. The annual event that will be on its 13th edition will now run from 16th to 18th December, 2019, organisers have confirmed.

With the new date for the festival announced, the organisers have extended accepting last moment entries till 5th December which might induce film makers to send in their films. Festival Director Shah Alam says, “Except for the date change, everything remains the same as planned. We have sorted out logistics and built support from locals, who are already overwhelmed with the film festival taking place in their backyard.”

"As Awam ka Cinema gears up to host yet another successful edition of Ayodhya Film Festival, we are focused on creating a vibrant ambience for film makers and audience to further enhance Ayodhya’s position as a leading film making and tourism destination (and not just a holy town) that offers unforgettable experiences," said Festival Chairperson and Jury Mohan Das. “This year’s selection spans a range of genres; from social issues to psychodrama and thriller, to provocative period piece and taut social commentary to award winning films across the globe,” he added.

The 13th Ayodhya Film Festival in partnership with other global film festivals will take place from 16th to 18th December, 2019. The full festival programme, screening schedules and nominations will be announced on 10th December, 2019.
Posted by Films & TV World at 2:15 PM No comments: 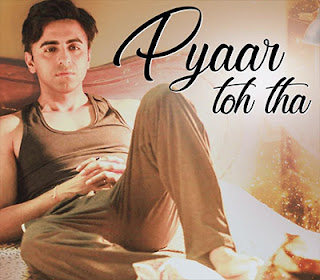 Some love stories last a lifetime, others fade away like a receding hairline. But one hopes and one believes that things will go back to the way they used to be. That emotion is at the heart of the latest Bala track, Pyaar Toh Tha.

Encompassing a sea of emotions, Pyaar Toh Tha sees Ayushmann and Yami in a stark departure from the mood we've seen them in so far. The comedy gives way to an intense romance, some cute moments and healthy dollops of drama. Jubin and Asees bring the fire to the raging intensity one sees on screen and one cannot help but feel overwhelmed with all the emotions at play. Directed by Amar Kaushik and produced by Dinesh Vijan of Maddock Films, the story of the film is all about a man in deep distress over his baldness.

Composed by Sachin Jigar with lyrics penned by Priya Saraiya, it features the voices of Jubin Nautiyal and Asees Kaur and is picturized on lead pair Ayushmann Khurrana and Yami Gautam. The song is now available on Sony Music India’s YouTube channel and across all streaming platforms. Watch the video here to get drowned in this deeply beautiful love song here.

Amrita Narayanan: Erotica and pornography are put in the same basket in India 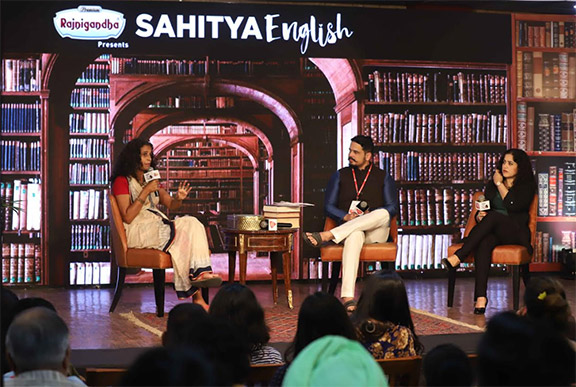 Amrita Narayanan who is a clinical psychologist has written Parrots of desire and A Pleasant Kind of Heavy. She has also researched the history of erotica in India.

Other eroticas that deserve kamasutra fame
While speaking about other literature material that deserves to be as famous as Kamasutra, Narayanan mentioned Tamil Sangam. She said, "These books convey the feelings of the people involved. Kamasutra doesn't involve any emotions. It is all about the steps. But these other books talk about the feelings and the emotions of the people involved."

Why erotica?
Madhuri Banerjee explained why she writes erotica. "I talk about relationships, my first book was about a woman who was a virgin and decided that the only way to be accepted by the society was to lose her virginity. She said that people don't talk about sexuality in India. My book came out in 2010, and all I wanted to do with the book was to create a dialogue about sexuality, but no one spoke about it. It is never about sexuality or writing erotica, for me, it has always been about relationship."

Has erotica liberated indians?
Madhuri said, "I think over time the internet has opened so much stuff for us, OTT is an uncensored platform, you have all the information out there. But, if you are choosing to be conservative, you will always be. If you have labels and boxes for yourself you will always be like that. There is information that is out there that will help you evolve and grow but, that is only if you are willing to do that."

Amrita added saying, "Books don't liberate people, people liberate themselves. But books can surely help." She spoke about an incident as well, "There are certain periods in Indian history, where Indians tried to promote the nation as the land of yoga, but not as the land of Kamasutra. People have actually come up to me and told me that I have spoilt the Indian culture after reading my book, A Pleasant Kind of Heavy. There was an Island of resistance to that."

How does news affect your writing?
Amrita said, she stopped watching the news while she was writing, A Pleasant Kind of Heavy, which was during the Nirbhaya rape case. This step was taken so that the news does not contaminate her mind and hints of it show in the book. "Growing up in the 80s in India, rape and harassment was the only thing that I grew up reading. A magazine even published an article on ways to save yourself while travelling. The news made me feel like my body was under attack and at that moment no human can be sexual. Shedding out the news was a way of protecting myself. That is when I could start to imagine and start to fantasize."

For Madhuri things are different. She said, "It is up to you how much you take in or not take in from the news. During the Mumbai attacks, I was in deep grief so I could not write for a long time. It can also be inspiring at times. But I don't shut myself out in any way while I am writing."

Why has erotica lagged since independence?
Amrita said, "India wanted to promote itself as a hardworking country after Independence. And hard work and sexuality don't go together. We abandoned this part of the cultural heritage after Independence. When the English came to India first, they thought of us as primitive native beings and we maintained that. We needed to maintain the middle-class work ethic of the people of India because we needed that image to promote the country."

Conclusion
Madhuri ended by saying that erotica writing should be a part of our education system. "We are teaching biology but we are not teaching sexuality. They should teach how to be ok with your body. We should be talking about this in our schools. Everything in India is about abstinence. Kids are going to find about it on the internet, parents and teachers should be talking to kids in school. Children should be able to write erotica and express their feeling about sexuality."
Posted by Films & TV World at 1:37 PM No comments: 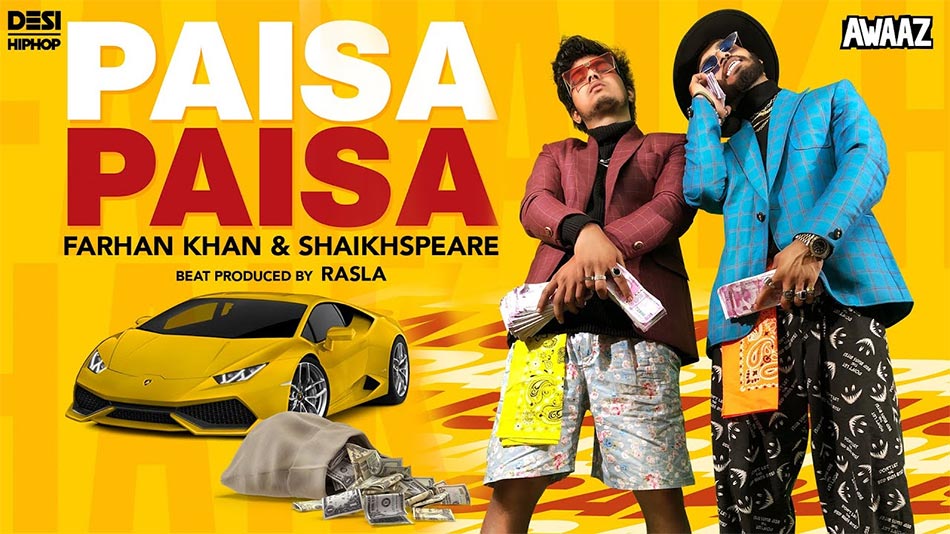 Yesterday saw the release of ‘Paisa Paisa’ by Sony Music’s Hip Hop focused label, AWAAZ. ‘Paisa Paisa’ features Mumbai artists - Shaikhspeare, Farhan Khan, and Rasla. The single is a conscious hip hop song with trap vibes written all over; where Shaikhspeare, Rasla, & Farhan Khan uses their art to show the ugly side of politics and greed. When asked about the single, Shaikhspeare went on to say, “We wanted to reflect how money was controlling things around us and make the message reach to the masses in an entertaining way”

Shaikhspeare is the co-founder of Mumbai's veteran Hip-Hop Collective, Bombay Lokal, which features multiple aspects of Hip Hop in 1 crew - including break dancers and graffiti artists. The crew operates out of Nalasopara, Mumbai and has been instrumental in spreading knowledge about Hip-Hop in Mumbai. As one of the veterans of the Hip Hop movement in India, Shaikhspeare took Farhan Khan under his wing for this single, and they both worked closely together with Rasla, the track’s producer.

Rasla played an integral role in the creation of the single, ‘Paisa Paisa’. As a producer, he has worked with multiple artists, and also features as a DJ with his own productions. The Gujarati producer took his time to craft his sound to stand out within the Hip Hop community. “The Hip Hop spirit is lit everywhere in India,” said Rasla, “It’s wonderful how Hip Hop has grown so much, and there’s much more to come.”

Farhan Khan, who kicks off the song in the first verse, grew up in Mira Road and has been on the grind in the Mumbai Hip Hop scene for the past three years. When asked about his thoughts on the current state of Hip Hop in India, Farhan Khan said, “It's great that the Indian Hip Hop scene is growing steadily; and the mass audience is slowly catching up to the Hip Hop energy.” He added, “And once they all catch up, it will be the true golden era of Indian Hip Hop.”  With multiple singles planned throughout the year, Farhan Khan has ultimate respect for the grind required to make it in the industry.

Awaaz has been instrumental in impacting the Desi Hip Hop scene in India throughout 2019, releasing ten back to back singles in the summer. The joint venture between Desi Hip Hop Inc and Sony Music India is on a mission to find, nurture, and celebrate Hip Hop artists from all over India and the South Asian diaspora abroad. With a weekly playlist by Awaaz on multiple platforms including Spotify, Saavn, Wynk, Hungama, and Amazon Music, listeners can discover the new wave of Desi Hip Hop music burgeoning out of India. This week, the Awaaz playlist features ‘Paisa Paisa’ along with multiple other hits from within the Indian Hip Hop community.