The analog print era, which is a century old technology, will come to an end within 12 months. India needs to increase, if not double, the no of digital film screens with smaller capacities of 250-300 seaters. However, the future will be defined by data analystics for better penetration and enhance film viewing experience.

Referring to the pre digitisation era, UFO's Mishra said that there were lots of challenges, cost of distribution, reach of films in the analog era. The biggest release 500 screens - tday 3,000 screens. Huge step as cost came down to one fifth. The reach of the screens gone up 5 times. Also, 90% films today are on digital platform. Analog is on its way out. Its sad because it is a 100 years old technology. Technology will take over where there is scope for optimisation. Within one year, the analog era in film exhibition and distribition will end. Kodak and Fuji are into dire straits. Traditional challenges of reach have phased out. For eg Shah Rukh Khan's RaOne went in Orissa in 100 screens whereas 60% of films don't go into Orissa in 1st week. India is underscreened in cinemas as the US has 38,000 screens while China has added 5,000 screens last year. Huge mass of untapped cinemas. The newer cinemas will not be 1000 seaters but compact cinemas of 250-300 will come in the near future. Today, an exhibitor can make a cinema in 6 months but getting a licence to run a cinema takes 12 months. Transparency is in and everything is on record.

Maharashtra Govt recently issued a circular where computerised cinema tickets are a must in all cinemas. Once this comes into being we can change the way biz is done, added UFO's Mishra.

UFO Mishra mentioned that smaller films like Jolly LLB and Mere Dad Ki Maruti are purely digital films. Smaller films may not warrant 28 shows a week. It can go to a 1000 screens with fewer shows. Digital cinema can help smaller non starry films reach out wider and bigger. Rental model is only for equipment but for the producer/ distributor, it is on a per show basis and it gives the producer flexibility to go ahead and increase/decrease the no of shows. Digital screening always gives better and rightful control to the IP owner (producer or distributor).

Vikram Malhotra, COO, Viacom 18, said that digitisation is helping curb piracy but it will take 5 years. The shift from big screen to small screen is evolutionary. The top 2 challenges are analytics and experiences. I release 18 films a year but I have no idea of optimal. A film is defined by its reach. Kahaani, OMG and Gangs of Wasseypur. One of the founding principles of any industry is to get access to data. What is the optimal penetration for any film? Is doubling our screen width the only solution? TV Ratings define products. Audiences are evolving faster. The addressable audience of 30 crore. Gadar did unique 4.3 crore audience footfalls. The unique visitors staying away. Hollywood films make fewer films but better films which give better experience. We can go from 9,000 to 18,000 screens that is convenience. The key is return on investments. Studios have promoted good content and professionalised the setup. Consumer research showed the way for marketing spends. We would like to double screens for Kahaani 2. A family needs value for money. In my perspective, ticket prices should go higher! Blockbusters will give deliver greater ROI across all value chains for studios. We are exploring TV releases too.

Anil Thadani, film distributor, said that our industry is based on relationships. Corporates take time but individuals take instant decisions. With Karan Johar and Rakesh Roshan going to independent distributors and selling rights, a new wave has been created. It is the experience that matters. If movie going becomes expensive, it limits the repetition. Dilwale Dunhaniya started with 30 outlets - the ticket rates were Rs 30 and Rs 50 but revenues generated were as high as what is achieved by some blockbusters today.
Posted by Films & TV World at 9:03 AM No comments: 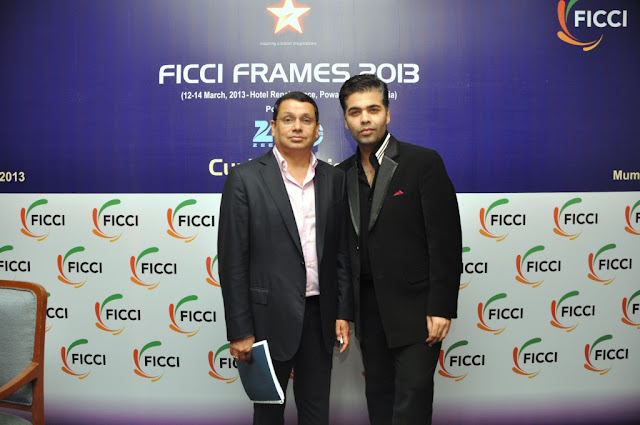 Ficci Frames, the annual conclave of the media and entertainment industry, will discuss in its 2013 edition ways to “maximise the economic and creative potential” of the industry in the country. The 14th edition of Ficci Frames, to be organised on March 12-14 in Mumbai, has unveiled its theme - A Tryst with Destiny-Engaging a Billion Consumers.

“While the industry has made spectacular progress in the last 20 years in increasing the intensity of engagement with the Indian consumer through superior content, there is still a gap in our ability to monetise the engagement and use the resources generated to advance both access and content,” said Uday Shankar, chief executive officer of STAR India, who has taken over as the chairman of the M&E committee.

“Frames will offer an opportunity for us to put these developments in perspective, look at the larger picture and engage on such a bold and important theme.”

Karan Johar, co-chairman of the media and entertainment committee, said: “We believe that our new agenda will be the change agent for social and commercial development, connecting a billion people, while shaping and informing their opinions and getting influenced by their collective needs in turn.”

At Frames 2013, the aim is to deliberate on the growth of the industry and find ways to maximise both its creative and economic potential.

The range of topics that will be covered include digitisation, censorship, marketing, exhibition and distribution. Also, at Frames 2013, information ministers of South Asian nations will form an exclusive panel on forging bilateral ties to augment growth among geographically and culturally connected countries.
Posted by Films & TV World at 9:33 AM No comments: