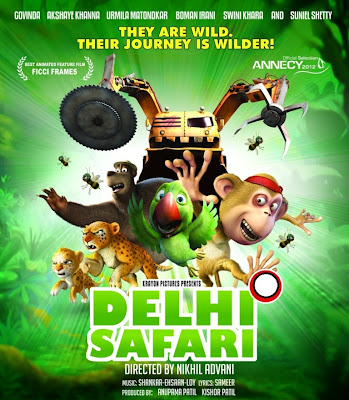 Devika Prabhu, director, programming, kids network, Disney-UTV states, “Hungama TV showcases the best of humour through engaging storytelling and the World Television Premiere of Delhi Safari further reiterates that commitment. Interestingly, this is the very first time that a Bollywood movie is premiering on a kid’s channel and we are looking forward to bringing more such firsts for our Hungama audiences.”

Delhi Safari is an adventurous and a heartwarming journey through the eyes of a young cub leopard, his lovable mother, a rebellious monkey and a charming bear when their forest is on the verge of destruction. To save their forest from humans, the animals decide to go to Delhi and protest in front of the parliament. However, to reach their destination, they have to undergo two highly complicated tasks: One – kidnap and convince a reluctant Alex the parrot who can speak the language of the humans and Two – travel all the way from Mumbai to Delhi! The movie features voices from some of Indian Cinema’s most popular actors including Govinda, Boman Irani, Sunil Shetty, Urmila Matondkar, Akshaye Khanna and Prem Chopra.

The highly acclaimed movie has travelled to multiple International Film Festivals and been dubbed in Russian and Chinese as well. The recent commercial release in the USA opened to rave reviews. The film has also been showcased at the Annecy Film Festival in France and it walked away with the best feature film (theatrical) award at the FICCI FRAMES 2012.  The film has also been shortlisted for consideration for the best animated feature film category for the 85th Oscars (2013).

Grab the tub of pop-corn and tune in to the fun-filled Hungama TV on December 25, 2012 at 10 am to watch the World Television Premiere of Delhi Safari.