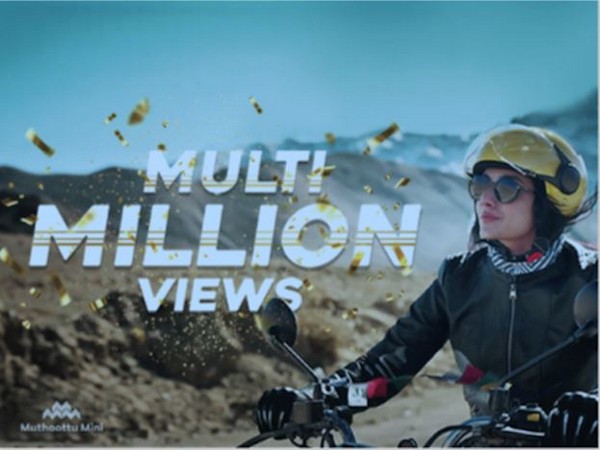 India's leading NBFC Muthoottu Mini Financiers Limited’s powerful portrayal of a woman protagonist in its latest commercial has taken the internet by storm and has got the netizens talking about it.

With over 2 million views in youtube itself (Malayalam and Hindi) and counting, the newly launched commercial film's storyline centering around a confident young woman rocking the social status-quo is driving conversations on social media.

Helmed by award-winning director Martin Prakkat and magnificently captured by celebrated cinematographer Jomon T. John, this masterpiece was shot at some of the most picturesque locales in Ladakh. The duo, true to their reputation, has brilliantly articulated and captured the controlled emotions of the protagonist, her sly suitor's expectations and the bonding she shares with her open-minded progressive father, sans cliched theatrics or verbatim.

The strategically thought ad brings the essence of women to focus, not conforming to expectations, or letting barriers to their dreams, get in the way – as mirrored by a soul-stirring drive through the limitless expanse of the Ladakh.

The film goes on to establish a strong message that no dreams are beyond a woman's reach if she is focused, has strong convictions backed by a like-minded and progressive-thinking partner. This storytelling perfectly aligns with the brand Muthoottu Mini's slogan - Standing by you, always.

Speaking at the sidelines of the launch of the new commercial, Mr. Mathew Muthoottu, Managing Director, Muthoottu Mini Financiers Limited said, “we are thrilled and ecstatic at the overwhelming response to our new commercial which encourages women to dream and calls for shattering cultural stereotyping of women. The film makes a bold attempt to dispel outdated societal myths still in vogue and the need to bring-in a paradigm shift in our attitude towards women. Being a socially responsible company, with strong values, we are extremely proud in rooting for a socially relevant cause. Time has come to address challenges faced by women and stress on the importance of increased participation of women in mainstream activities, be it socio-cultural-politico-economical. We urge women of today to dream, stay financially independent and go places. Rest assured, we, the Muthoottu Mini, will stand by you always"

If you haven't yet watched the ad, watch it here...