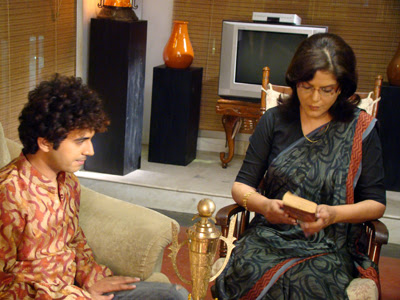 Last week Zeenat Aman was in Kolkata busy shooting for Sanghamitra Chaudhuri's Hindi project titled “Strings of Passion". Revolving around three post grad students, this is a story of their relationships and also the effect of bad parenting on their lives. While Zeenat plays an overprotective mother to one of the guys played by Girish Nagpal, the other guys are Shubh Mukherjee and Trishaan. 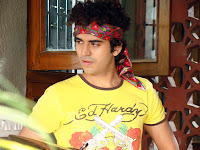 Girish Nagpal who is making his debut with Zeenatji in this film plays a soft yet loving and a timid and introvert character, but full of life and zest when he is in love with his girl. A prolific writer also, he is part of a rock band with his cousin and friends and even wins a trophy for the same. But destiny has something else stored for him. And the film takes a different turn altogether which will make the audience sit up and take notice. Speaking about his role, Girish says, “It is a good script and all the three leads play very different characters and don’t overlap each other and is crucial to how the story develops.” 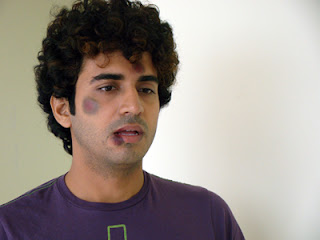 But more importantly, what everyone on the sets and even a veteran actress like Zeenat Aman was talking about was the striking similarity to Raj Babbar. Zeenat says the first time she saw Girish on the sets; she was amazed by the uncanny similarity in their appearance. “He is playing my son Aman urf Mannu in the film. Though he doesn’t act or speak the way Raj did when he debuted against me in B R Chopra’s Insaaf Ka  Tarazu, I was clean bowled by his histrionics in acting. What an amazing performer Girish is,” she gushes. “In fact, Girish is a kinda perfect double. Though Raj has two sons – Arya and Prateik, none resemble him in looks the kind Girish does.”

Girish jokingly admits that his family and friends and especially his mom always commented on his resemblance to Raj Babbar. “I thought that’s how moms and friends are, especially that I had veered towards acting as a career. But it was only after Zeenatji commented that I feel it has to be, else such a veteran actor atleast would not try and pull my leg,” he chuckles. “In fact, I did jokingly tell Zeenat mam that let history repeat once again. Bhagwan kare, my debut film with her meets the same success as Raj Babbar Saab. And ya, Rajji is also from as me.” 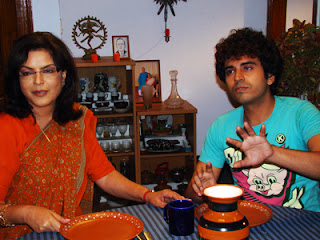 Girish also admits that he was approached by a Kolkata director Indrasis Acharya to play the younger part of Raj Babbar for his film “The Bartender” which is being produced under the banner of Eon Films. As far to my knowledge, they are yet to approach Raj Babbar  saab for the same. “The Bartender’s story portrays the life of a bartender in three phases – young age, middle and old age. They were all set to change the young age part as it was difficult to get the same actor do all the three parts which would not be that convincing. However, Indrasisji happened to see me at the shoot when he came to meet my friend Mohan Das of Eon Films and felt I fit the bill perfectly. Though I have been given a brief, we are yet to sign on the dotted line as Raj ji has to say yes to the project first.” 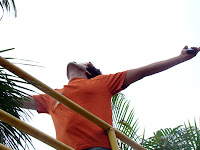 The debutante is a theatre personality and has done quite a few plays with renowned names in theatre circuit and was even part of Tom Alter’s theatre group performing with him even in . He is also doing Dinkar Rao’s “The Dope Girl” as a lead which will be rolling from March end. No wonder, he is all set for a passionate start to his film career. “And ya, Passion is the word, even in the title of my debut - Strings of Passion,” signs off Girish.
Soham, Films & TV World Editor
Posted by Films & TV World at 11:00 AM