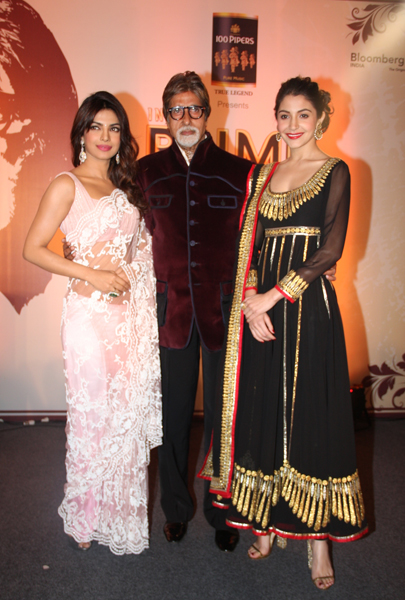 After chronicling the inspirational lives of some of India’s most illustrious names in a quest to give India its true role-model, BIG CBS Prime’s definitive show India’s Prime Icon has revealed the one name that will perpetually be remembered as an Icon in the real sense. An exclusive home-grown property by BIG CBS Prime, India’s Prime Icon saw the coming together of some of the nation’s most awe-inspiring and influential personalities spanning various professions like sports, entertainment and politics. Ending all debate, viewers have chosen the enigmatic superstar Mr. Amitabh Bachchan as the first ever winner of India’s Prime Icon on BIG CBS Prime.

The legendary actor was felicitated India’s Prime Icon at the grand finale event of the show by the divas of today Priyanka Chopra and Anushka Sharma, who together conferred the prestigious title on the luminary. This was followed by a special tribute by writer and critic Bhawana Somaaya who has compiled a Dictionary on Bachchan - the first in the history of Indian cinema titled Amitabh Lexicon, with the unveiling of the book and a special audio visual paying tribute to the Icon.

Bollywood’s biggest superstar, Mr. Bachchan, has revolutionised Hindi cinema with his iconic blockbusters like Deewar, Don and Zanjeer. His unassuming nature, hard work and inimitable style are the very qualities that have earned him the status of a legend, a demi-god and of course India’s Prime Icon.

India’s Prime Icon brought together the crème de la crème of the Indian political, film, television and sporting worlds like Sachin Tendulkar, Narendra Modi, A.R Rahman, Aamir Khan, and Shah Rukh Khan amongst others. The competition was intense and fans from across the nation voted for their favourite Icons with the help of insights from lyricist Prasoon Joshi, celebrated columnist Malvika Sanghvvi and adman Suhel Seth who served as Opinion Leaders on the show. Based on audiences’ votes Mr. Amitabh Bachchan emerged as the clear winner, hence walking away with the coveted title.

Commenting on the occasion, Mr. Anand Chakravarthy, Business Head - BIG CBS Networks said, “We couldn’t have asked for a better grand finale to the show, with the most deserving, Mr. Amitabh Bachchan, being conferred the title of the India’s first ever Prime Icon. Epitomizing the word Icon, we are happy that India has selected the most commendable Icon. We are thankful to our partners Pernod Ricard and Samsung Galaxy for partnering with us on this innovation.”
Posted by Films & TV World at 8:28 AM