Subhash Ghai's Mishti is actually Indrani Chakraborty and not a debutante : Has done Hindi Film "Strings of Passion" 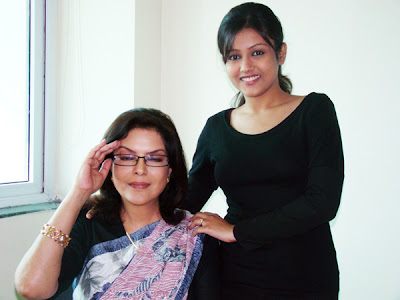 Subhash Ghai has put all speculations to rest about the heroine of his new film “Kaanchi” on his birthday. He introduced his heroine Mishti (which means sweet in Bengali) whom he selected from 240 girls that had auditioned for the role. Mishti who hails from Kolkata is debuting in Hindi with this film according to mentor Subhash Ghai.

However, not many might be aware that Mishti (as she is fondly called at home) is originally Indrani Chakraborty and is actually not making her debut. Rather she is starring in the Hindi Film "Strings of Passion" directed by Sanghamitra Chaudhuri which is already complete and due for release. This film that stars Zeenat Aman, Shubh Mukherjee, Indrani Halder, Avalok Nagpal, Paru Gambhir, Rajesh Sharma, Amit Trishaan Sarkar and Sangita Sonali is at present doing the rounds of festivals. And she is known by her official name - Indrani Chakraborty in it. In fact, not many know that it was in Sanghamitra Chaudhuri’s Bengali Film "Bidehir Khonje Rabindranath" that Indrani Chakraborty (now renamed Mishti - her sweet name at home) debuted in 2 years back.


Indrani Chakrabotry aka Mishti meanwhile has also done a Bengali Movie with Prosenjit where she is playing her daughter and should hit the screens by April 2013.
Posted by Films & TV World at 12:02 AM