"Beneath the Hagia Sophia" set to Premiere at the LACMA on Sept. 23 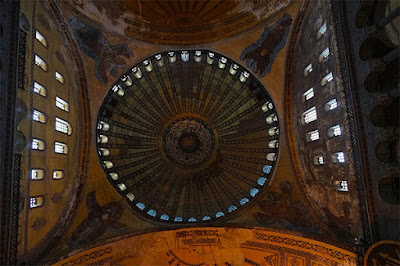 Kinostanbul presents the world premiere of "Beneath the Hagia Sophia," (www.beneaththehagiasophia.com) a documentary about the secrets under one of the world's most iconic structures. The event will be held at the Los Angeles County Museum of Art's (LACMA) Bing Theater on Sunday, Sept. 23rd.

"Beneath the Hagia Sophia" is directed by Göksel Gülensoy and is based on decades of exploration of the legendary structure's underwater tunnels and waterways. A short presentation by archaeologist Haluk Çetinkaya, PhD will precede the screening.


"The Hagia Sophia's dome and minarets are breathtaking symbols of Istanbul," says filmmaker Gülensoy. "We have dedicated ourselves to uncovering a world just as spectacular as the one above, and we are incredibly excited to be able to show our discoveries at this prestigious museum." With a team of divers, Gülensoy carried out a series of underwater shoots in the area in 1998, and most recently in 2012, uncovering sites that have been buried for centuries.

Located in the heart of Istanbul, the Hagia Sophia dates back to the 6th Century and is famous for its large dome considered to be an architectural marvel of its time. It was once regarded as the most important church in the Christian world and later became a revered mosque during Ottoman times. After undergoing extensive conservation, it is now a popular site for tourists from around the world.

Kinostanbul (www.kinostanbulfilm.com) is a production company founded by Gülensoy, with a slate of documentaries and short films. Gülensoy plans to continue work on the Hagia Sophia project with additional underwater shoots in the area. Sena Denktas serves as the film's executive producer and George Kallis as music composer.

Founded in 1965, LACMA is the largest art museum in the western United States, with a collection of over 135,000 objects that illuminate 6,000 years of art history and mirror LA's rich cultural heritage. Sponsors include LACMA, Turkish Airlines, the Turkish Consulate of Los Angeles, the Association of Turkish Americans of Southern California, Emine Gülistan, I Can Barbecue, Newport International Travel and The Bol Group. The screening is free and open to the public. Event details are at www.lacma.org/event/beneath-hagia-sophia.
Posted by Films & TV World at 9:13 PM