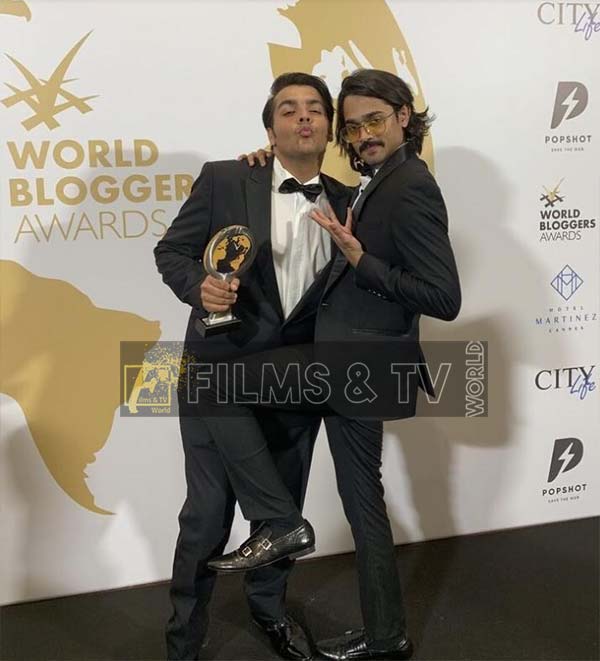 It’s a proud moment for India as 3 of India’s most beloved bloggers made a smashing debut at the inaugural World Bloggers Awards (WBA) 2019. Making a grand impact to the event’s first ever red carpet roll out in Cannes, Indian bloggers and Youtubers Bhuvan Bam of BB Ki Vines won the ‘Global Entertainer of the year 2019’ Award for his excellent contribution to digital entertainment; Ashish Chanchlani won the ‘Best Comedy Influencer’ Award and finally Gaurav Chaudhury won the ‘Best Technical Influencer’ Award. The 'World Bloggers Awards' is the world’s first ever international awarding ceremony for the best bloggers across 42 nominations, uniting and celebrating influencers and opinion leaders from around the world in various fields. The star-studded affair premiered in Cannes at the iconic Hotel Martinez and welcomed over 200 of the world’s most followed, reputed and creative finalists across multiple categories of digital content arts forms from cooking, to philanthropy, this year. The event will look at expanding globally with a mission to recognize and award these digital champions evolving as social change makers as new age brand evangelists, role models and storytellers.

As a highlight to the event, all 3 Indian bloggers, featuring among the top 14 super winners, bagged the prestigious awards in their first ever nomination across their respective categories of recognition. Garnering a global fanfare, the World Blogger award, in its inaugural year was being followed by over 102 million people worldwide. Outside of India, the event witnessed applications from over 3000 international blogger sensations around the world including United States, Brazil, France, Ukraine, Russia, Italy, Great Britain, China and UAE amongst other countries. The WBA 2019 is the first of its kind international, multi-category and multi-platform (Instagram, YouTube and Facebook) awards that is as deemed as the “Oscars of the Bloggers”.

Truly elated on winning the highest honor as Global Entertainer of the year 2019, Bhuvan Bam said, ‘’I feel extremely happy and proud to win ‘Global Entertainer of the Year’ on such a huge forum. This award rewards all of my hard-work and perseverance and I dedicate it to my BB Ki Vines army for always believing in me and never giving up. Onwards and upwards now.”

Excited and emotional on winning his award, Ashish Chanchlani said, ‘’I want to thank my family, my mom, dad and sister Muskan, my team and all my friends, because of whom this is possible. And most importantly my followers and my fans, I thank them. I feel extremely proud to represent India here. Vande Mataram !‘’

Adding his infamous sense of humour and energy to action, Ashish Chanchlani after his acceptance speech, even managed to get hosts, the Lithuanian TV icon Greta Sapkaite and the famous food blogger and TV reality star FoodGod to say live on stage “Bijli ka bill, tera baap bharega?” – one of Ashish’s most iconic one liners.

Gaurav Chaudhury aka Technical Guruji, who couldn’t make it to Cannes, sent a very touching video message on receiving ‘The Best technical Influencer’ Award, that mentioned “I thank all my subscribers and followers who always stood along, and with their valuable feedback and incredible support, made this journey a smooth sail for me.”

“We have taken into consideration three kinds of criteria. Quantitative of course (number of followers, trends), but more important were qualitative aspects (pics, production, copywriting, creativity), and above all commitment, both from the fans AND the influencers themselves. The relationship between bloggers and their audiences, the genuineness, and the involvement are the keys to success” says Jacques-Olivier Broner, head of jury at the World Blogger Awards 2019.

Additionally, commenting on India’s perfect trio sweep at the awards ceremony, Jacques-Oliver added “I must admit that Indian influencers are impressive, and the proximity they have with their fans is exemplary. WBA could develop specific events for India very soon, where there is so much digital talent”.

“We were impressed by the number of applicants and their turn out. We are delighted by worldwide interest we received. Everybody is already looking forward to World Blogger Awards 2020” said Maria Grazhina Chaplin, founder, World Blogger Awards. Further sharing her thoughts on the Indian bloggers’ impact at the awards and what this mean for India, ‘‘And India could play an important part in this journey’’.

The event witnessed some of the most glamourous names from the industry such as the international sensation Nusret Gökçe, infamously nicknamed Salt Bae, Gianluca Vacchi, Jonathan Cheban better known as @FoodGod, Russian television star Victoria Bonya, and fashion supermodel Victoria Silvstedt among others. The World Blogger Awards congratulates the 2019 winners.

World Bloggers Awards is the world’s first ever awarding ceremony for the best bloggers across 40 nominations. WBA unites and celebrates influencers and opinion leaders from around the world in various fields, taking their social input to the higher level.