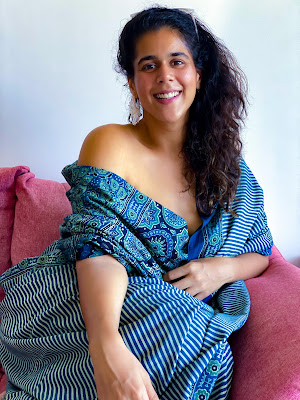 Recognised for her performance as plus-sized protagonist in the hit TV show Badho Bahu, Rytasha Rathore makes her way to Netflix with ‘Masaba Masaba’, a playful, fictional peek into the life of Masaba Gupta. Playing Masaba’s best friend on the show, Rytasha is seen as a sexy, funny, young, strong and independent boss woman setting up her own business.

Rytasha goes beyond breaking stereotypes, be it playing a wrestler Bahu at 22 years of age in a daily soap, to addressing body image issues and societal perceptions of women. Known for speaking her mind and not shying away from sharing her thoughts on sensitive issues, Rytasha’s social media posts have engaged and inspired many young people to begin their journey towards self-love and being one’s truest authentic self.

Rytasha Rathore says, “A Netflix show has always been a personal goal so yay!! I’m playing Gia Irani, Masaba’s best friend, on the show, who’s stepping into her dad’s very big shoes as she navigates many 'firsts' while singlehandedly revamping the family business, but she’s a boss and just gets things done. Playing Gia was more up my alley because we’re similar in many ways. The writing of the role is also something that I have to mention. Oftentimes in mainstream entertainment, the heroine’s best friend is reduced to just that and not a fully formed human woman. This one differs because four women wrote this show. They have all lived this life, they understand the depth of female friendships and how women really do uplift one another. It’s so heartening to have this kind writing of female characters, that really embodies women in all their glory and doesn’t show them through the lens of patriarchy.”

The fictionalised series, inspired by Masaba Gupta's real life, that went live on August 28, 2020 on Netflix has a chartbuster with Nikitaa’s ‘Aunty kisko bola bey’ picturised on Neena Gupta.