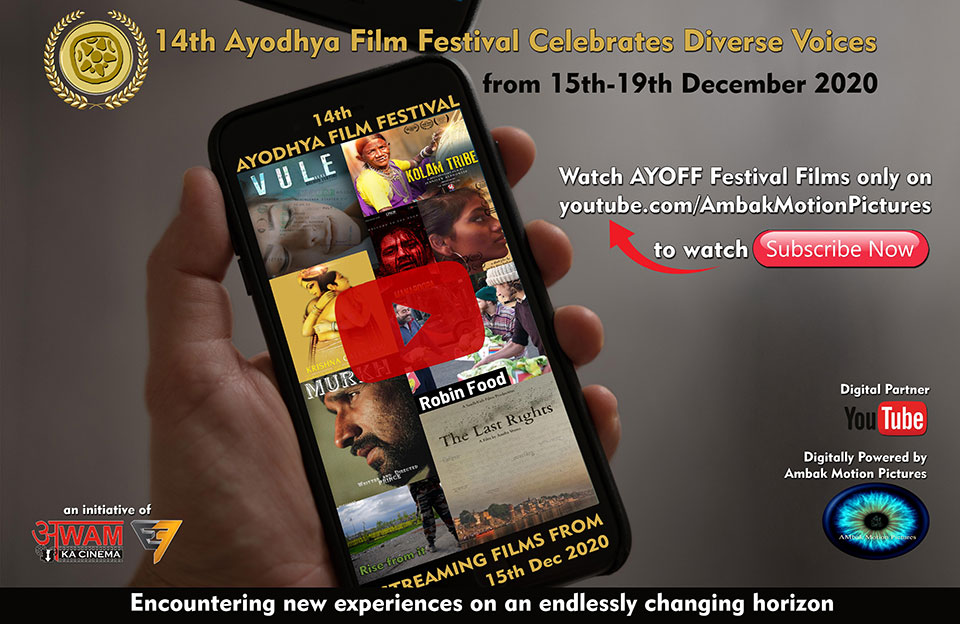 With the virus still going strong and the government in its attempt to control has led either to a shutdown of public events, or limiting gatherings to a bare minimum, Ayodhya Film Festival has decided to go virtual this year. The scene is the same all across the globe including the top notch Film festivals like Cannes, Sundance and Toronto that have gone virtual. “Even we at Ayodhya Film Festival are no different. Bringing it straight to the drawing room or virtually anywhere for our audiences, the festival, which is normally held in Ayodhya will be going online this year,” confirmed Festival Director, Shah Alam.

An opportunity to connect with audiences, inviting people to “attend” who might not have had the chance otherwise, the organizing team said that this year they will hold a virtual screening of the films and more. To make it successful, team AYOFF have joined hands with Anuj Bhardwaj of Ambak Motion Pictures to stream movies free on YouTube and thereby making it available for all. “Just like our film festival, it will be a Free for all event. The films will be streamed online on a youtube platform during the five day event. However, audiences have to register themselves and subscribe on the channel to watch movies,” added Shah Alam.

AYOFF thus welcomed the move to go digital as it will usher in a new way of showcasing films when allowing audiences to experience films at a festival is not like as it used to be earlier.

“Challenges keep evolving as you move into different stages. Encountering new experiences on an endlessly changing horizon, the AYOFF has now become a beautiful mosaic of a collective spirit and energy, thereby celebrating the films, the artists, and the makers behind it,” said Festival Chairperson Mohan Das. Quoting Edward de Bono, he concluded: “Creativity involves breaking out of established patterns in order to look at things in a different way. As AYOFF moves into its 14th year, it is indeed a new experience that we will be holding a virtual film festival. Maybe this will be the new norm in future - conducting it both online and offline.”

The virtual festival will kick off on December 15th and run until December 19th. It will stream feature films, short films as well as documentaries. Viewers will be able to view extraordinary films and experience them in the comforts of their home or virtually anywhere. To watch, please subscribe to www.youtube.com/AmbakMotionPictures