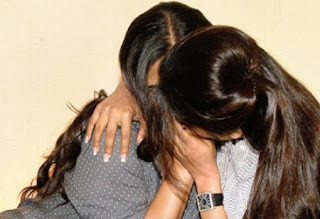 The marketing team of UTV is resorting to every available creative (read cheap) idea to bring in the audiences and make the film “No One Killed Jessica” a hit. Right from Rani Mukherjee doing a Shashtaang Namaskaar on a satellite channel to cracking cases on CID to doing a MOCK KISS (a la lesbian style) with Vidya Balan exclusively on Zoom, they have done it all. However the icing on the cake is the start of the “Thappad Helpline” to complain about eve teasing, harassment and other issues, which they claim to, have an astounding response. According to reports, they have been receiving 5000 calls a day, which in itself is staggering but totally unbelievable.
However, as far as our reports go, the team has shot a couple of MOCK thappad promo which will be aired on all the channels. Two thappad promos were shot which is to be aired from tomorrow on all chanells. One of the thappad promo was designed on a producer asking an upcoming starlet / actress to “compromise” for getting a role. And the second was that of a gym instructor feeling the female members in the guise of getting them do the workouts in the right manner. Both the thappad promo were shot recently.

The gym promo that was shot at a suburban gym had the instructor touching the female members at all inappropriate places in the guise of helping them do their workouts in the right manner. Harassed by such behaviour, one of such members calls on the “Thapad Helpline” and complains about the harassment meted out daily at the gym. Vidya Balan and Rani Mukherjee then ask this female to go ahead and allow the gym instructor to do what he wants, but not before equipping her with a spy camera that shoots all the instructor's antics. Later the female confronts the instructor and asks him what has he been trying to do. The instructor abuses her and in this melee enters Vidya Balan and Rani Mukherjee as the screen characters and take the instructor to task, not before the instructor getting a “Thappad” for his act. The gym instructor’s role was enacted by an upcoming star Rahul Dahel who is soon making his foray into serials and films as a lead character.
Wow! Kongrats, Rani & Vidya and the entire creative team for the promotion idea for the film! The idea is far too creative but not a real hard task to implement, if done actually. So, instead of doing these MOCK drills, if you guys could actually start such a helpline and could take the eve teasers and harassers to task, it would really be an achievement. And where else, but in the Capital where Jessica was killed in full view of everyone, where females are not safe. But alas! In this country, nothing will be done to stop such crimes. But Entertainment and Film promotion ke liye kuch bhi karega…
Posted by Films & TV World at 10:51 PM