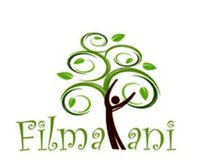 To showcase the diversity of contemporary independent cinema and producing short films on a wide and varied subject is one thing and getting it showcased is a another ball game altogether. Rather it’s a major task these days and naturally, most of our producers don’t want to invest in this medium as they don’t find a good platform to showcase their talent and reach out to the common audiences. Either the short films are relegated to the audiences at Film Festivals held across the country or at international venues and the effort of bringing a theme to the common man just remains a dream for lack of a proper platform to reach out to them.

But Writer, Producer and Director- Sundeep Malani had a different take on this when he was making his short films. He wanted to reach out to the common man and thus he initiated a new concept - of showcasing his films at “The Malani Film Fest”. And to feed this new idea and get it widely accepted, Sundeep reached out to the audiences at large via the biggest networking site – Facebook and through other social contacts. His efforts have paid off and The Malani Film Fest that is being organized on 5th February 2010 at Star House, Mhada, Andheri (West), will be seeing a good mix of all types of audiences who have already confirmed their invites to the show. 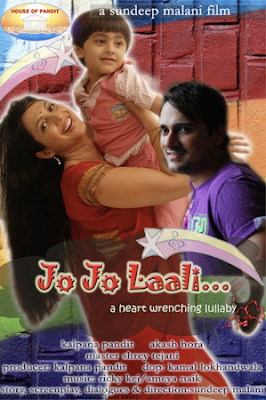 The Malani Film Fest will be screening Jo Jo Laali, Shaayad, and Hum tum or Loan followed by a 10 minute showreel of his film Who 5 Din. While Shaayad will be screened for the first time, Jo Jo Laali was widely accepted by the audiences at a special screening conducted by Filmalani in Mumbai, , and . In fact, Los Angeles Distributor Quantum Releasing has acquired the worldwide rights of the film and its now making its way to the American Film Market at on March 4th. Meanwhile, Shaayad is making its way to the 3rd Bangalore Queer Film Festival (BQFF) to be held this year on 25th, 26th and 27th February 2011 and has been SELECTED for screening. This is one another step towards reaching out to the vast audiences.
JO JO LAALI (38 minutes) is a heart wrenching lullaby made in HINDI with a few lines in Kannada and English. Its about a classical dancer who falls in love with a photographer and they have a love child. The photographer turns out to be a flirt and she breaks up with him. Years pass by and for a shock, she gets to know that the child is infected the deadly virus HIV Aids. Its then she recalls what took place in her life and she moves on after she looses her loved ones. Produced by House of Pandit, it stars Kalpana Pandit, Akash Hora, Shrey Tejani. Music by Ricky Kej and Ameya Naik, it is been scripted and directed by Sundeep Malani. 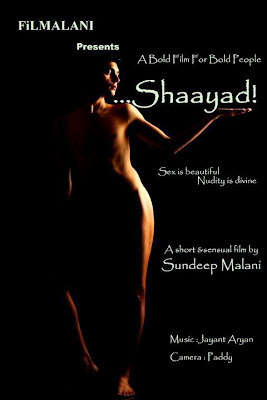 SHAAYAD (28 minutes) is about a living relationship that has nothing to do with physical attraction. The couple who are friendly are in love, but it’s a bonding that they live on. A boyfriend who ditches her and a gay friend who loves her and the twist and turns at the climax is interesting. Very real and not filmy, it stars Jenica, Viviek and Vikramjit. Produced by Filmalani, it is scripted and directed by Sundeep Malani.
HUM TUM AUR LOAN (8 minutes) is a short film about a young family, happy, luxurious lifestyle but with problems of debts. They are unable to meet their ends. How they cope up with their life is what is dealt with. Starring Sheershika Kasarvalli and Aryaa Trilok. Produced by Life Is Entertainment, it is scripted and directed by Sundeep Malani
WOH 5 DIN (10 minutes) is a fun filled suspense thriller shot in Nainital. 4 Boys go out for vacation with fun and frolic and when they reach the destination, they face obstacles, problems and one by one, they get hooked and killed. Who is the murderer forms the thrilling suspense and is unveiled in an interesting climax. Featuring Piush Anand, Akash Hora, Mann Hora, Anant Joshi, Bhagyasri Rao, Jenica and Ruby Anand. It has music by Ricky Kej and score by Dev Chauhan. Produced by Bless Films and Pr, it is scripted and directed by Sundeep Malani. 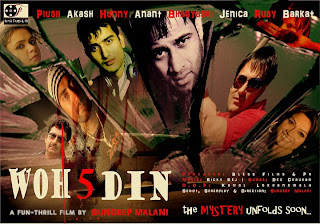 This novel idea has actually taken off and quite a few are thinking of recreating this magic coming under one umbrella. If it really happens the way Sundeep has envisaged, short films will get a new lease of life and more and more people will look forward to putting their dreams onto reality.
The main attraction of this Film Fest will be the premiere of Sundeep's new short film "Shaayad" and will be attended by Kalpana Pandit, the producer and actress of Jo Jo Laali. Also confirmed guest list include Sanjay Suri, Viveik Vaswani, Aloknath and a bevy of film and TV personalities.
The Malani Film Fest is being organised by the House of Pandit, Filmalani, Bless Films & PR, Eon Films, Reproductions-the PR agency and is a Malani Talkies Presentation.
Posted by Films & TV World at 2:57 PM