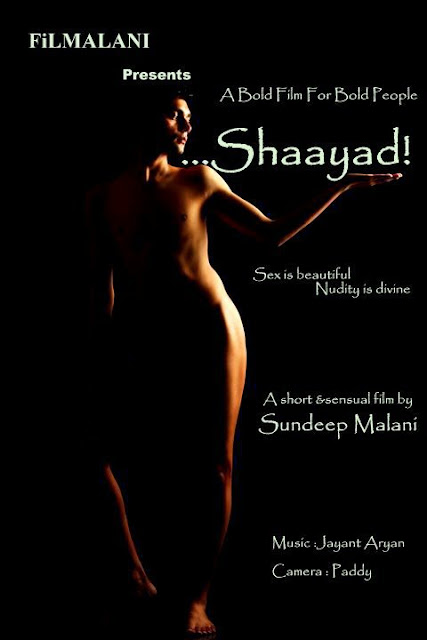 Recently under the banner of Filmalani, Director Sundeep Malani screened his short films – Jo Jo Lali along with Hum Tum aur Loan and the promo of his thriller film Woh 5 Din..... however, the icing on the cake was the screening of “Shayad” – whose posters were screeching saying “Sex is beautiful, Nudity is divine”… and with such a tag line who can refrain from not being there to watch the premiere show of this sensuous movie? Naturally the turnout was over whelming with the likes of Sanjay Suri, Priyanshu Chatterjee, Kalpana Pandit, Sachin Chhabra, Kishore Namit Kapoor, Jayesh Sheth, Mohan Das apart from a host of other models and facebook friends of Sundeep.
Through Shaayad, Sundeep tried to touch a very niche area and tried to explore the relationship between two thick buddies, albeit of the opposite sex. A film dealing with sex, lust, love and betrayal, it also explores the other side dealing with companionship, emotions and understanding. The story revolves around Viveik and Jenica and their lives intertwined. Both Viveik and Jenica are flat mates and aspiring actors trying to make their mark in the fashion and film industry. The couple looks like being in a living in relationship at first as the very opening scene shows them lying on same bed in negligees and cuddled to each other. Later Viveik tryies to be the perfect metrolsexual male by even making Coffee for her.
However, the story takes a sharp drastic turn when Jenica moves out of her home and instead of proceeding to her meets, cancels her appointments and goes to meet up her designer boyfriend for some lusty sex. But wait, don’t let vague ideas flash your mind that this female is cheating on her husband or lover as the guy is also planning some different take. He logs on to Planet Romeo and hooks a guy and ends up calling him home for some moments of private pleasure. What follows next is a straight repeat from Madhur Bhandarkar’s scene from Page 3 where Konkona Sen Sharma catches her boyfriend with his pants down with a fashion designer.  This film too has Jenica walking in and repeating the same dialogue – Cant you guys close the door atleast? Couldn’t have been anything different? There is. As Sundeep has given a twist to this scene with Viveik saying that Jenica knows that he is gay.
Its only later at this stage it clears that she is in a relationship with that fashion designer (Vikramjeet) and who is too consumed with his work and not able to spend time with his girl friend, except on bed. Oh gosh!! Give a break!! Wondering what makes us say that? Well, if she is so consumed by love with her fashion designer boyfriend, then what is she sleeping with this guy (oops read gay) for? I strongly agree that two friends of opposite sex do share a room and stay together, but sleeping together?  But what is all the more unusual is that why do they need to play hide-and-seek and get onto their respective partners if they so much know about each others lives. This point remains unclarified though.

Later a bitter break-up follows between the girl and her boyfriend who has even forgotten her birthday. She comes home dejected only to be met with a caring birthday celebration and she is floored. But hold your horns… The girl starts fantasizing that the guy is making passionate sex to her, when she is interrupted in her dreams and brought back to the present by this gay room mate. She reveals to her homosexual flat mate that they could be a couple only if he was not gay, which goes to say that she is too confused about what she wants in life.


What one fails to understand is what did the director had in mind when he conceived this story. The story is not clear and as well fails to rise to any decent levels of film making - right from technicalities to story telling. If he wanted to portray a story on gay life and what happens behind closed doors, he could have tried something daringly different as Riyad Winci Wadia tried with BomGay - a decade and half back. Those were the dark days then and the subject was far more taboo than in today’s times where people no longer move in the closet.
Moreover, the smooching scenes between Viveik and his partner Rohan are shot very shoddily rather than aesthetically. One also might be wondering what had the tagline “Sex is beautiful, Nudity is divine” got to do with the basic storyline? Also the shot in the poster of a silhouette nude Viveik or a nude Viveik playing a guitar (as was splashed all over on facebook) has no semblance in the movie. Seems it was just shot to titillate and bring in the audiences and also to get the required attention as Viveik went ahead and gave a few interviews everywhere including Hindustan Times saying ‎'Nude is Sensuous. Porn is Titillating'. Wonder what do we call this short film as??