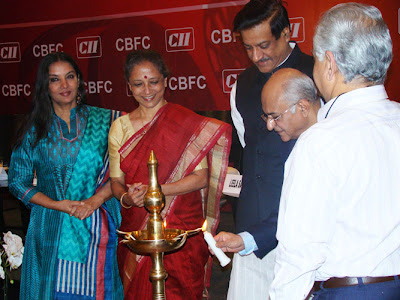 The Central Board of Film Certification (CBFC) finally inaugurated an online system of application for film certification yesterday at an interactive session on Cinema and Certification ‘Samvaad CBFC’ which was held jointly by CBFC and the Confederation of Indian Industry (CII) at Hotel JW Marriott, Mumbai. Joined in this interactive session with the big wigs of the film fraternity that included Shyam Benegal, Amit Khanna, Shabana Azmi, Mahesh Bhatt, Mukesh Bhatt, Raj Tilak, Rakyesh Onmprakash Mehra and the like, Maharashtra Chief Minister Prithviraj Chavan inaugurated the system. However, it was not a Marathi or a Bollywood film that was chosen as the application for certification. It was Bhojpuri Film “Awli” that started the process of online application.
Endorsing the e-governance aspects of CBFC and pointing out that the state government of would work with film fraternity, Maharashtra Chief Minister Prithviraj Chavan welcomed CBFCs initiation to sensitize and familiarize regional officers of CBFC for film appreciation of world cinema. Mr. Chavan also wants “Samvaad” to be institutionalized and made it as an annual event.
Speaking at this event, CBFC chairperson, Leela Samson promised to bring in more transparency in CBFC’s operations and usher in a change from film certification to classification process that would enable film makers to reach out to a target audience group. She however also expressed grave concern over the growing trend of violent and sexually explicit material in the regional cinema. “We are concerned about a growing trend of extremely violent cinema, especially in the regional language cinema while picturisation and lyrics of Bhojpuri cinema are almost pornographic. We will take corrective measures and hope to have industry and civil society’s backing on this,” Samson said at this event.
“We look forward to move to an atmosphere of complete transparency,'' said Leela Samson explaining that applying for classification of a film can soon be initiated online in various regional centres of the country. Samvaad CBFC 2011 also marked the inauguration of CBFC Online system that would enable producers to apply online for Film Classification Certificate. CBFC is also looking at introducing a new fee structure for documentary films and guidelines which are different from feature films.
Posted by Films & TV World at 11:31 AM