BIG CBS Prime the first premium English general entertainment television channel, from the BIG CBS bouquet, premiers a hilarious American sitcom ‘How to be a Gentleman’, from 25th November, at 8.30 pm. Created by lead actor David Hornsby, the series is an adaptation of the nonfiction etiquette book of the same name by John Bridges.
Two former high school classmates, an uptight columnist (Hornsby) and his more freewheeling, Iraq war veteran, trainer (as well as a former high school bully) (Kevin Dillon),  renew a friendship that never really existed before. 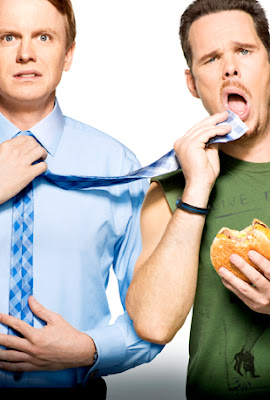 Inspired by the book this series follows an unlikely friendship between Andrew Carlson (David Hornsby), a traditional, refined columnist to an etiquette magazine, and Bert Lansing (Kevin Dillon), a reformed ‘bad boy’ whom Andrew knew in the past, and who has inherited a fitness center. Loud and sloppy Bert is meshed with Andrew, a print dinosaur, who finds himself with a new boss his son's age forcing him to go down-market. As he describes it, the mag's new goal is to reach "men in their 30s who act like they're 15." Or in the case of "Gentleman" creator-star David Hornsby, write like it. Bert is hired as Andrew's life coach to get him learning how to be more of a man rather than the gentleman he has always been. Their differences are great fodder for comical situations, as they renew a friendship that never really existed.
Although Andrew's and Bert's views are different, they wind up finding out that they are more similar than they thought. The show is written and produced by David Hornsby ("It's Always Sunny in Philadelphia"), Adam Chase ("Friends") comes How To Be a Gentleman, a comedy in which two worlds collide to find common ground.
Watch out for this smashing new comedy that premieres on Friday nights at 8.30 pm only on BIG CBS Prime.
Posted by Films & TV World at 7:18 AM