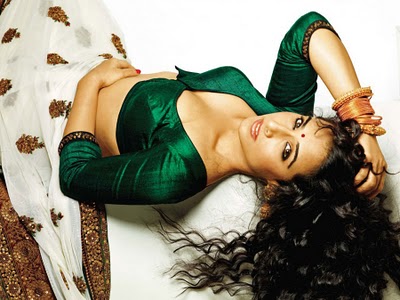 Whoever said that there is insane amount of competitiveness in Bollywood should see India’s Glam Diva contender Sonakshi Sinha. Even though Vidya Balan is one of the contenders on BIG CBS Love’s India’s Glam Diva along with Sonakshi, nothing stops the Dabangg girl from appreciating what is she believes is the best. The Dirty Picture, starring Vidya Balan, released in the theatres around the country yesterday, 2nd December. The actress’s work was not only appreciated by the critics but also with by Sonakshi Sinha.
Sonakshi was so pleased with her senior’s work in the film that this new entrant in Bollywood tweeted out saying, “Amongst us heroines, Vidya Balan is the only hero! Congratulations #thedirtypicture for a phenomenal start! Can NOT wait to watch it.”
Wonder what the other actresses on India’s Glam Diva have to say about this? Watch leading ladies of Bollywood battle for the viewers’ votes to be crowned as India’s Glam Diva, only on BIG CBS Love.
Posted by Films & TV World at 7:12 AM