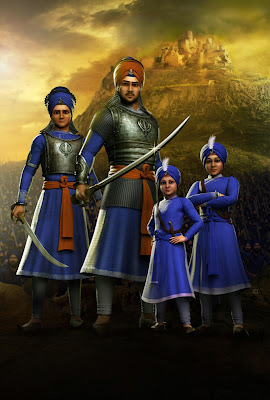 Harry adds, “We then closely worked with Mr Prasad Ajgaonkar the head at the Animation Studio “IREALITIES” to create the world of that era. Finally after an intense effort of literary and technical research for over three years, the First Look of the Film in 3D Animation being also made in S-3D : that is 3D projection in theatres, is ready.”

Speaking more on the subject, Harry gives more insight into the subject. He says: “There comes a time in one’s life when one looks back……overcoming the famous line of the famous poet William Henry Davies “what is this life if, full of care, we have no time to stand and stare…..” and realises, it’s time to be of service….to the society, to the roots you belong to……..and the search within me started…to look for a platform I could use to complete my mission…what better I thought than a film that could make millions visually conscious, and aware about the History of Northern India.”

“I picked up the pages from the Sikh History which were very dramatic….pages that smouldered my heart and at the same time made me feel proud of the sacrifices of the Four sons of Shri Guru Gobind Singh ji: Baba Ajit Singh Ji, Baba Jujhar Singh Ji, Baba Zorawar Singh Ji and Baba Fateh Singh Ji,” Says renowned producer director Harry Baweja whose Baweja Movies P Ltd has churned out films that were technically innovative like Deewane, Love story 2050, topical like Diljale, musical chartbusters like Dilwale, Betaabi, Karam, Main Aisa Hi Hoon, and Action film that set a new trend in Qayamat.

When the Turkish and Mughal invaders suppressed the common man in India with atrocities and forced conversions, then rose a sect, caste being no bar, from amongst the suppressed Hindus, Muslims and Sikhs, baptised by Shri Guru Gobind Singh Ji, “The Khalsa”.

Martyrdom in Khalsa is fundamental and represents an important institution of the faith.

This story of “Chaar Sahibzade” is about holding the sanctity, and sacrifice for the sake of the Sikh religion. The Khalsa stood the test, now and again for its own existence and the two tender younger sons of Shri Guru Gobind Singh Ji, too stood their ground, and accepted martyrdom. When it came to fighting the enemy in a battle unto death, age was no bar, and Shri Guru Gobind Singh ji’s elder two sons were no exceptions.

That the history of any religion may be written with pen & ink… but the Glorious Sikh History is written with the edge of Sword & the redness of the blood. The foundation of Sikhism is very strong, and it is cemented on the supreme sacrifices of its great Martyrs, including The “Chaar Sahibzade”

The script and the making of the film is being co-ordinated with the team at the SGPC and Harry has been in consultations with the SGPC ever since he have started work on this project.

Speaking about the launching of the “first look” of his film, Harry said that it is being done by the Honourable Chief Guest. He will first unveil the poster of the film, and shall then be honouring the screening of the first Trailer of the film. The film is already in production since September 2012 and expects to release the film in theatres by ‘Next Winter’. The film shall be released in cinemas Worldwide, with projection in 3D and 2D and shall be released in Punjabi, Hindi, English, in various other Indian and over a dozen foreign languages.
Posted by Films & TV World at 10:09 AM