World’s toughest vehicle gets couture fashion make over at IDEX 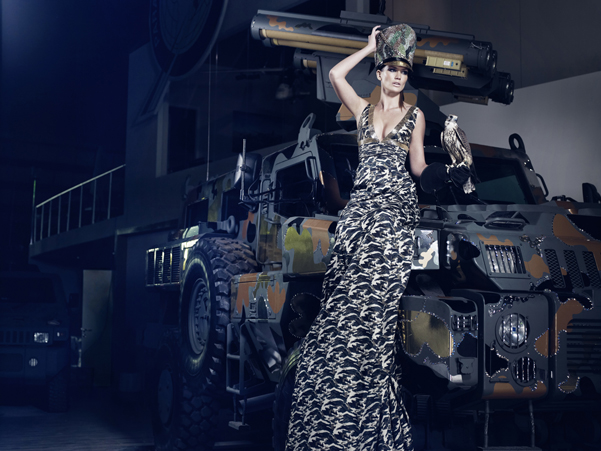 The world’s toughest vehicle, the Marauder, has received a high-end fashion makeover in response to growing public interest for a consumer friendly version, with daily inquiries from all around the world.

The Marauder underwent a makeover by renowned South African fashion designer Gavin Rajah and a team of stylists. This entailed the application of thousands of Swarovski crystals and gold, bronze and chrome coloured camouflage.

The glittering vehicle was unveiled in front of 60,000 people at the International Defence Exhibition (IDEX), in the United Arab Emirates, with a top international model dressed in a matching ball-gown and holding a live falcon. The vehicle will not be for sale to consumers. 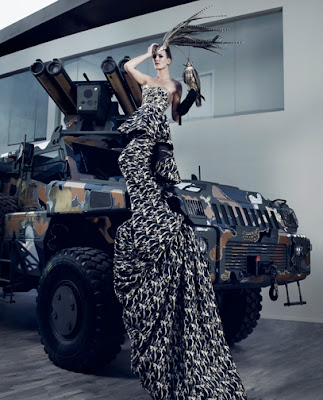 Ivor Ichikowitz, Founder and Executive Chairman of Paramount Group, said that while ‘making over’ the world famous armoured vehicle was somewhat light-hearted, it is important to remember the Marauder is designed to undertake a serious role as an armoured personnel carrier used for peacekeeping and managing regional instability.

“We have designed this customised vehicle to celebrate the Marauder’s on-going reign as the world’s toughest vehicle, and the public’s appreciation of this world-leading innovative machine.

“Paramount Group is in the business of innovation, we are constantly pushing the boundaries, which is why our vehicle is still the toughest yet.”

The Marauder was pronounced ‘the world’s toughest vehicle’ by BBC television show Top Gear when it beat the Hummer in a series of tests which included how well it withstood a land mine explosion.

Designer, Gavin Rajah is a UNICEF Goodwill Ambassador with a fashion house in Cape Town and Paris. His work has featured in international publications such as Vogue and he has dressed celebrities such as Naomi Campbell, Beyoncé, Cameron Diaz and Tina Turner.