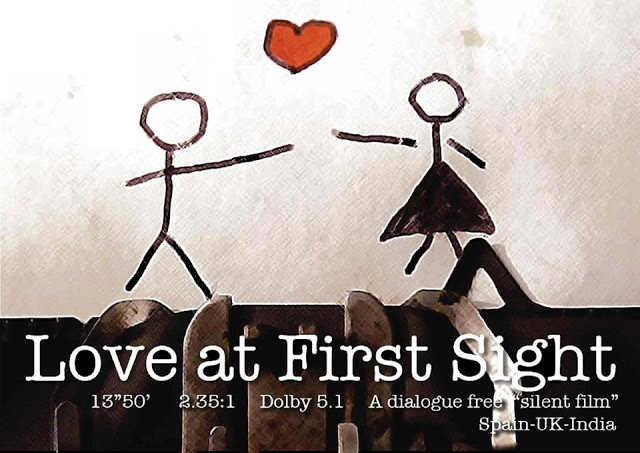 Written and directed by Mark Playne, "Love at First Sight" is an international entry received of late. A heart-warming story of a lonely young man and his increasingly creative attempts to attract the attention of the girl of his dreams, it is a must-see for all singles, romantics and anyone who has ever felt ignored.....

An Indo Spanish UK Production, "Love at First Sight" is a remarkable film on Lonliness and Love. According to Mark Playne, “I was keen on a debut short to choose a script that would have the widest appeal. Irrespective of nationality or culture, we’ve all be in love. We’ve all felt ignored. We’ve all wondered if we’d be more attractive if we were somehow different. We all fear loneliness. Kids are born into the world and cry - fearing they might be alone. Old people die - knowing they are alone. It’s a grim reality and life has enough sad endings - we are surrounded by them.” He continued, “Just watch the news. I wanted this story to be light hearted - uplifting and tell people (young and old) with hope that loneliness is only a temporary state - that love and companionship could be around the very next corner.”

Speaking about his cast, Mark found Francesca Binefa’s profile on a casting website. The lead Shane Zaza like the title of the film was cast at First sight. Since Mark wanted the film to travel across the oceans to various Film Festivals, he decided to make his debut film – Silent - without Dialogue. He says, “I wanted to avoid anyone anywhere feeling that it was a foreign film. I didn’t want to be in a situation where we needed sub titles. I wanted to allow the film to work on a subconscious level. Without dialogue I feel we are more open and free to interpret what is happening based on our own experiences - and tell the story with our own subconcious dialogue and meaning.”

Winner of 7 International Film awards including Shin Young Kyun Arts Foundation special Award - Asiana (Korea), Best Debut Film - Jury Award- I've seen films (Italy), Best Romantic Comedy - Jury Award - Calaveras, California (USA), Best Director - Jury Award - Hollywood Feel Good Film Festival (USA), Best Short - Audience award - Newport Beach, Los Angeles (USA), Best Comedy - Jury Award - Trimedia, Colorado (USA), Best Short - Jury Award- Corinth WCD (Greece) and Nominated for Best Comedy - Shanghai International (China), the story is based on the experiences of the Director who lived in Madrid for over a year in the late 90’s. “It is based on a true story form that time in my life. The girl whose window was opposite mine across the street had the habit of opening her curtains and shutters the same time as me each day. She’d give me a little smile and it was something I looked forward to each morning,” said Mark Playne about how he conceived the story.
Posted by Films & TV World at 9:16 PM