“But cancel we did. It was our grand Awards event which we had to cancel and it’s a decision that we did not take lightly,” said Dr. Mansoor Showghi Yezdi, Chairman & Festival Director, CICIFF. “Considering this was our first year, we had planned for a grand Awards event at a leading star hotel. However, the well-being of our esteemed guests, festival partners, film enthusiasts and our team was paramount and hence we called the event off,” he added. The Awards event was conducted later in the evening followed by a networking get together at the same venue after the screenings for the day ended on day 2. “We know it was no substitute for the grand awards event with its unique and fantastic audience, but at least it’s some way to honour these amazing film makers for their wonderful films that made its way to our festival.”

The awards evening took off with Dr. Mansoor taking the stage to speak about the festival and why it was named as the Café Irani Chaii International Film Festival. He also went on to mention that the Chaii has two “i”s in the name of the festival that symbolizes the relationship between the two countries. “I’ve added the two “i”s - one for India and the other for Iran,” he says with a sparkle in his eye. He also enlightened the guests about his documentary by the same name that attempts to trace the history of the Irani cafés through the cities of Bombay, Pune and Hyderabad.

Though scaled down, the awards event still did see the presence of Bollywood actor Yashpal Sharma, Flora Saini, Rekha Rana and Rohan Mehra of ‘Bazaar’ fame. Honouring the esteemed presence of Yashpal Sharma at the festival, his Excellency Consul General of the I.R. of Iran Mr. Alikhani as well as the Hon’ble Prof. Dr. Ashouri Director Culture House of the I.R. of Iran, Mumbai awarded him with the CICIFF “Excellence in Cinema” award. A film actor and theatre artist, Yashpal Sharma is best known for his roles in Hazaaron Khwaishein Aisi, Lagaan, Gangaajal, Ab Tak Chhappan, Apaharan, Singh Is Kinng, Aarakshan, Rowdy Rathore as well in the Haryanvi film ‘Pagdi the Honour’ which has been conferred with two National Awards.

The incredibly versatile Yashpal Sharma says he is ecstatic on receiving the CICIFF ‘Excellence in Cinema’ Award. "I'm humbled and honoured for this recognition. I’m really ecstatic as this is not an acting award; it’s an achievement award. It’s such a morale boost and shows that you are being appreciated for what you do.” Speaking about his love of Indian and Iranian cinema, he went on to praise Iranian films he’s completely in awe of. He mentioned that one of his best loved Iranian language films happens to be Majidi’s “Children’s of Heaven” as well as Abbas Kiarostami’s “Where is the Friend’s Home?”

Speaking to a cross section of the filmmakers and audiences, Ashu Dhaliwal, producer of the short social film ‘Manav Bomb’ says she is happy that at least the festival was conducted and her film screened too. “We do understand the organiser’s predicament at such a time of international calamity. While we didn’t as much get the festival experience, the awards celebrations and red carpets as one is used to, but we did get an opportunity to be recognized for our film, which was the silver lining,” said Ashu.

“Yes, even I do agree. It’s so unprecedented for not being able to stand up there with my cast and present this film. But given the situation, this was the best thing to happen than not doing at all,” said Jyoti Bajaj, co-director and writer of Zuni that took home two awards - Best actress for Divya Dutta and a Best editor award as well.

Neeraj Awchat who took home the Best Story award for his short film ‘Block’ says, “It’s heartening that the festival is committed to ensuring the health and safety of the public while also supporting friends, filmmakers and storytellers who look to such film festivals as a platform to showcase their work to audiences. What else can one ask for?”

Despite its limitation, the Café Irani Chaii International Film Festival will surely be looked forward to from the viewpoint of a movie enthusiast who wants to see some of the best cinema at such a festival. And CICIFF did provide them an array of wonderful films. “Cinema is the most powerful medium and telling specific stories that connect you with realities you had no idea or connection is a weapon these makers have. Being at a film festival reminds me of this power of film, the power that the story can make you see things. ‘Purdah’ was one short film that had the capacity to keep you riveted with a masterfully executed screenplay and earnestly shows us the beauty of good cinema. Another film that I liked was ‘Carbon Monoxide’ that showcased the brutal reality of carbon monoxide deaths,” said Arbind Mishra who travelled all the way from Bengaluru just to watch good cinema.

Another film enthusiast Chandrashekhar Bhide who was religiously present on both days right since morning watching wonderful cinema says, "It is an inspiring experience that is vastly different from other film festivals. What sets it apart is the warm and wonderful welcome accorded to even the film loving audience. This is what one needs to learn from these festival organisers. The best part was the Irani brun maska pao and chaii during breaks. No wonder, I’m going to come every year now.” Its inspiring to know that Chandrashekhar is a B.Tech in Computer Science & Engineering from IIT Bombay as well holds an MBA degree from IIM Ahmedabad. 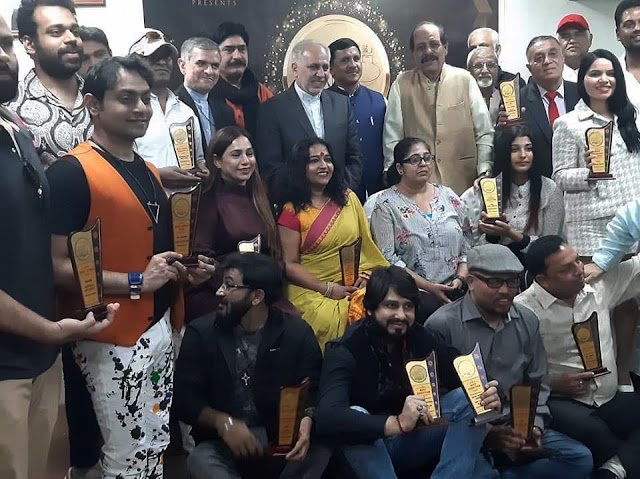 “I totally agree with this gentleman” said Jitendra Diwakar an aspiring film maker from Mumbai. “Their completely genuine intimacy permeated throughout the event and this sensibility I'm certain it comes from the top. I came just for the love of Iranian cinema and to see some of its best works here. I’m glad, I could make it.”

Jury Chairman as well as additional Chairman & Festival Director Mohan Das says, “It’s such a strange thing to conceive, get ready to deliver and not give birth. We preferred delivering what we envisaged, albeit on a smaller scale as this was a difficult situation for us all. We are grateful for our film fraternity’s understanding, loyalty, and continued support during this challenging time. Same time we thank all our sponsors and participating partners for their understanding at this difficult time.”

As the evening proceeded on, the festival organisers thanked everyone for making time to be present and chose to end the festival with a group photograph of all the film makers with the esteemed guests, jury and film makers. This was followed by a networking get together at the Culture House of the Islamic Republic of Iran, Mumbai with a promise by Dr. Mansoor Showghi Yezdi to come back with more wonderful films at the next edition of the show.