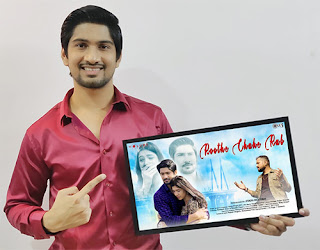 Tips Music's next Bollywood Music Single "Roothe Chahe Rab" will soon be on air with Sandesh Gour and Sheetal Tiwari who were earlier seen in the Marathi film "Jhing Premachi" together as a lead Star Cast. Like all major music videos, this too is based on romance. However, due to some serious medical issues the girl faces, she leaves her lover by lying but ends up with an accident. While the song has been sung, composed and written by Sonu Singh (SP) who is debuting with this single, it is produced and directed by Jitendra Singh Tomar.

Sandesh Gour who was part of shows like Saraswatichandra, Pratigya, Tarak Mehta ka Oolta Chashmah and Pyaar Tune Kya Kiya, debuted in Bollywood with Meeradha as well as a couple of Marathi films. Speaking about this music video, he says it was a fun filled experience. "Though the video is pretty emotional, we had a great time shooting it.," he said. Sheetal Tiwari who was last seen in Balaji's web series Baarish with Sharman Joshi says, says Yaari was her recent music video. “When I heard this song for the first time I got goose bumps and I ended up saying yes instantly. Not only are the lyrics and music fabulous, but I loved the way the video has been shot,” she added.