Zee Digital is striding towards the top position amongst internet websites 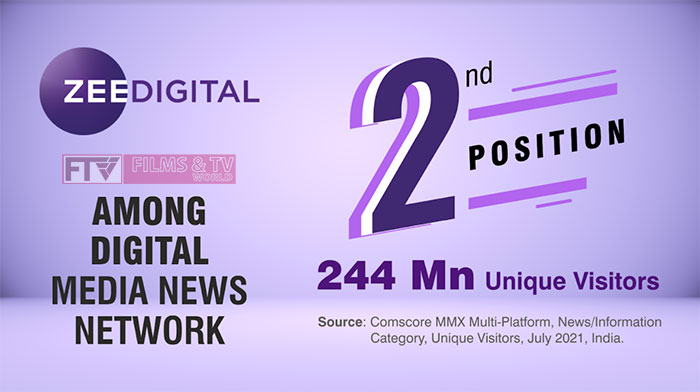 Zee Digital has started inching towards the top position amongst top internet websites like Amazon, google and Facebook by coming in the sixth position ahead of its several other Indian competitors. In the month of July 2021, India’s most diversified digital publishing group- Zee Digital achieved another milestone by reaching 244 million unique visitors maintaining its second position in the news and information category, as per Comscore.

Mr. Abhishek Nigam, Chief Operating Officer- Digital, Zee Media Corporation Limited said that the achievement is an affirmation of the quality content and the hard work put by the team at Zee Digital. “Every month we’re aiming for a new milestone. This would motivate our team further to keep pushing ourselves to achieve excellence. We would strive to better ourselves with content with widespread appeal and will continue to grow in the same manner,” he said.

Mr Nigam stated that overall the group has registered growth of 1.5 times between the months of January and July 2021. “The other digital assets of Zee Media, also have achieved extensive growth. India.com reported a Y-o-Y growth of 2.3x, DNAIndia.com grew by 3.6x, Wionews.com grew by 3.7x and BollywoodLife.com grew by 2.9x contributing to Zee Digital’s growth,” he pointed out.

Zee Digital comprises of 31 websites, 20 brands across 12 languages with viewers across digital replicas of the Zee Media’s 14 linear news channels along with websites such as India.com, BGR.in, BollywoodLife.com, TheHealthsite.com and CricketCountry.com