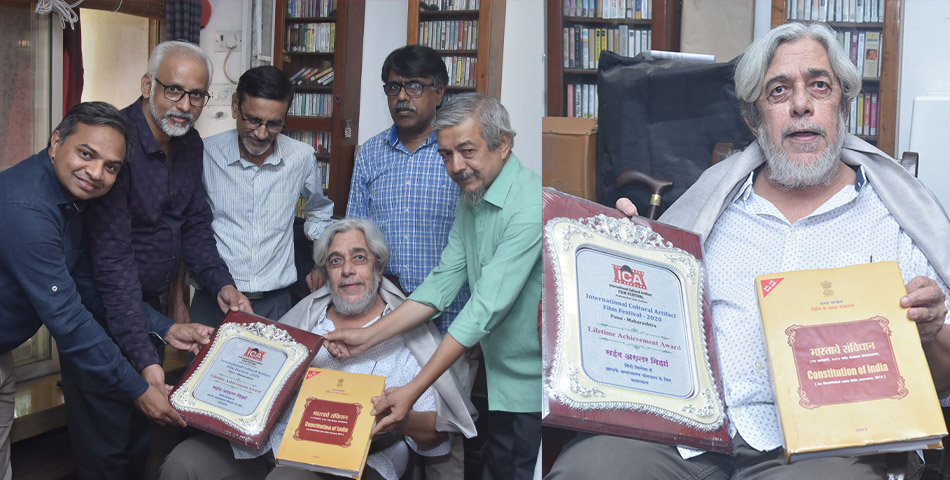 The ICA Lifetime Achievement Award is conferred to a talented film maker who have made a their mark in the industry with a purposeful film with a strong social message. The award consists of a memento, a copy of the Indian Constitution, a shawl and a cash cheque of Rupees Eleven Thousand. Noted director Sagar Sarhadi who directed Bazar with Smita Patil and Naseeruddin Shah was the recipient of the award in 2019.

Saeed Akhtar Mirza started his career as a documentary film maker in 1976, graduating to films with the acclaimed Arvind Desai Ki Ajeeb Dastaan (1978), about the frustrations of an idealistic youth caught in the trap of a feudal money culture. It won the Filmfare Critics Award for Best Movie for the year. This was followed by Albert Pinto Ko Gussa Kyoon Aata Hai (1980), about an angry youth, in search of his class and ethnic identifications. This too won the Filmfare Critics Award for Best Movie. Next in this series of his based on the urban middle class, came his satire on the Indian judicial system, Mohan Joshi Hazir Ho! (1984), an old couple which struggles for years in their legal case that runs for years under a corrupt judiciary, in nexus with real-estate developer. Set in the urban ‘middle class’, his film chronicled their struggles and search of identity in a rapidly changing landscape and economic conditions. Then finally in his angst-ridden movies came, Salim Langde Pe Mat Ro (1989), starring Pawan Malhotra, an archetypal Muslim youth caught in the circle of crime and recrimination, and their collective state amidst growing communalism, ghetto mentality, and a search for an ethnic identity which does not clash with a national identity.

Meanwhile, he directed and produced popular TV serials Nukkad (Street Corner) (1986) and Intezaar (Wait) (1988), the first was set in lower middle class of various communities, which meet at a street corner in Mumbai suburb, shared their struggle of everyday survival in a harsh world, and was a big hit. He has lectured widely on Indian cinema at universities in India and The US. He contributes regularly to Indian newspapers and magazines on current political debates and through film reviews.

His last film Naseem was released way in 1995 set in collapsing secular structure post Babri Masjid demolition era. The film was featured in Avijit Ghosh's book, 40 Retakes, Bollywood Classics you May Have Missed. After that as he put it, "The demolition of the Babri Masjid was the last straw. Naseem was almost like an epitaph. After the film, I had really nothing to say. I needed to regain my faith and retain my sanity. So I decided to travel around India and document it on a video camera". Subsequently he devoted his time to travelling, writing and making documentaries. Later started on his autobiographical work,[6] finally released in 2008, as his maiden novel named Ammi: Letter to a Democratic Mother which is about the memories of his mother who died in 1990 and a series of vignettes comprising Sufi fables, childhood memories.

Saeed Akhtar Mirza is the life member of International Film And Television Club of Asian Academy of Film & Television. Currently he is making film, Ek Tho Chance.