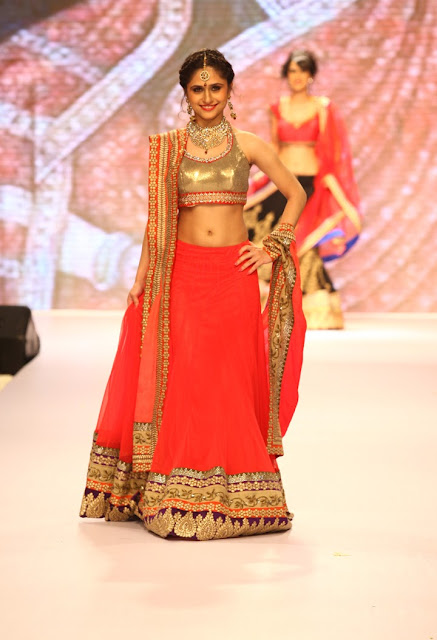 In a steady move to realize her dreams in entertainment industry, popular TV actor Hunar Hali walked for a cause - for BETI by Gitanjali at India International Jewellery Week (IIJW) which she closely identifies with. BETI is an initiative which creates awareness and campaign about issues like female foeticide, acid attack and women empowerment. Hunar Hali sported stunning outfits designed by Mohini.

It was a ‘show with a heart’ where famous TV and film celebrities along with well known corporate personalities walked the ramp for BETI – a joint initiative of Gitanjali Group and Gr8. Gitanjali has taken up different initiatives for empowerment and upliftment of socially underprivileged sections. We are now extending our support and involvement against.

Hunar Hali is a young talented indian television actress, who was born and brought up in delhi.  She completed her Bachelors in Mass Media. She loved acting since her childhood, and liked Raveena Tandon a lot. In 2007, she got a good opportunity in the soap opera Kahaani Ghar Ghar Ki, and that was the beginning of her acting career. In 2008, she played the role of Soni Khuraana in the show Grihasti where she was younger daughter of Balraaj and Amrit Khurana and got married to Ronak.

Later she played the role of Milli Sethi in 12/24 Karol Bagh where she was the sister of the protagonist, Simi Sethi from 2008 till 2009. She played the role of Aditi Jaisswal and Neha Shekaawat on Colors TV's show Chhal - Sheh Aur Maat. While 12/24 Karol Bagh was being shot, she lost her father and then took up the entire responsibility of her family. Her mother was very supportive of her when it came to her acting career, so hunar kept trying her luck visiting mumbai time and again.

Now the beautiful actress Hunar Hali  who was seen last in Chhal Sheh aur Maat , with actor Dishank Arora of Punar Vivah fame have been cast to play pivotal roles on the show.

Hunar Hali who won hearts with the portrayal of a possessive lover in 12/24 Karol Bagh will be once again seen essaying a negative role. She has replaced Parakh Madan and will now play her role. She will be seen playing the character of the female leads sister. While actor Dishank Arora last seen in Punar Vivah will be seen in the role of male lead's younger brother Aditya. His character will have a grey shade.
Posted by Films & TV World at 6:00 PM