Jaanleva 555 to have its promotion in Los Angeles 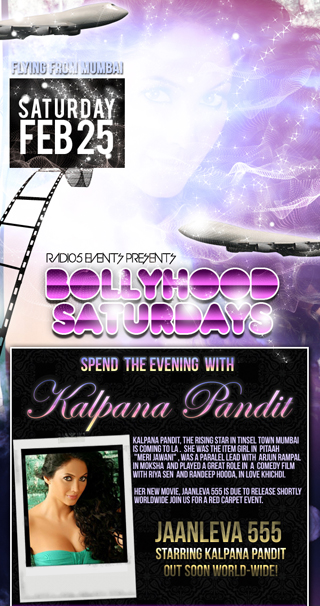 Radio 5 events in Los Angeles will have an exclusive Kalpana Pandit evening at Los Angeles on Feb 25th, wherein the actress will promote her latest Bollywood Film Jaanleva 555, directed by Sandeep Malani. This musical film, ready for release is now on International Platform for Promotions and is actively taking part in every event in the United States. Very recently, the film was showcased at a Multiplex to gauge the response from the Indian Audience and for raising a fund that would benefit with the proceedings of the film to a Medical Institution.
The event at LA, will have a Musical Ball with the actress accompanied by Cliff Janke, an American who plays one of the lead role in the film. At the event that will be musical with songs and dance, the films promos and the songs will be showcased to the audience.
Jaanleva 555 has 13 tracks composed by various music directors with which 2 tracks are in English composed by Bradley Janke and Mike Paul Hughes.
Posted by Films & TV World at 11:16 AM