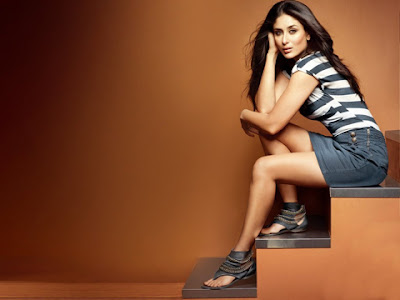 She has millions of fans all around the world and one look at her pretty visage leaves people mesmerized. She has appeared opposite the biggest stars and is loved by one and all. That’s Kareena Kapoor for you! This weekend watch the beautiful Kareena on India’s Glam Diva, on BIG CBS LOVE.
The actress who has risen to the heights of superstardom talks about her love, life and career. Since her debut in Refugee, Bebo has always been reckoned to be an actress to watch out for. However success did not come easily to this glamorous diva. After her initial success, Kareena encountered quite a few unsuccessful films. Talking about Kareena, Rajeev Masand, a well known film critic and jury member on the show says, “There hasn’t been an actress who has made more bad choices then Kareena”. But it was this initial set back that led the ‘Chammak Challo’ girl to go on and achieve what she has today!
The actress reveals that she was wary of making bold choices earlier on in her career. But all that changed when she decided to star as the young prostitute with a golden heart in the movie Chameli. Apparently, Kareena had been offered Chameli a year before she actually took up the film as she was initially reluctant to do a risqué role at the beginning of her career. It obviously was a good decision as her portrayal of Chameli garnered her The Filmfare Special Performance Award and the film marked a significant turning point in her career as an actress.
Find out all this and more about your favorite diva on Saturday, February 25 at 9 pm on India’s Glam Diva only on BIG CBS Love.
Posted by Films & TV World at 9:44 AM