Salt & Light is ready to rock on with music by Stone Soup Soldiers from Denver, US 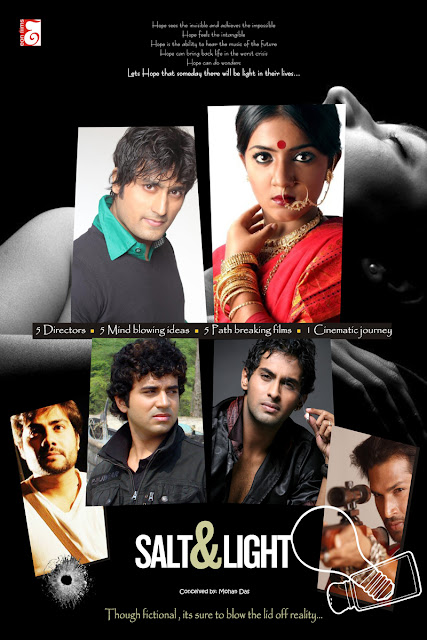 A Bollywood anthology film, Salt & Light is a unique and innovative attempt by Eon Films to provide Indian audiences with a realistic film which interweaves five short stories into one film. It is not that this kinda attempt has not been tried before in Bollywood. “Yes, a few tried it and even we did ‘Daughters of this Century” way back in 1999. But then all other films including our own were directed by one director. So there was no novelty in it. However, Salt & Light stands a bit different from the other anthology Indian films as 5 different directors will be directing each part, albeit all tied up in one story. The scripting has been done as in a feature film format and in no way would the audience feel they are watching short films strung together, ” said Mohan Das, CEO, Eon Films.

Salt and light are metaphors used by Jesus in the Sermon on the Mount, one of the main teachings of Jesus on morality and discipleship. This metaphor in Matthew has a direct reference to the theme of the film based on male exploitation and victimization. Just as the saltiness cannot be restored in salt if its lost  - same goes to say about our male protagonists whose lives won’t be the same again. Yet after that very dark night, the morning ray of hope is sure to instill a new meaning for them to live and go on with it. This film is about the shiny days beyond those dark nights in the male protagonists lives.

“To talk of the title track being composed by Mike Paul Hughes, let me first say - Mike is a Good Samaritan and a dear friend. I came to know him through Facebook and am very happy that he has agreed to do the title track for this film,” says Mohan. “We wanted a very heavy rock metal kind of music which is actually his forte. What I heard from the rough scratch he mailed me, I was very happy and am sure the final will be mind blowing. The recording is being done at Colarado, Denver (US) today and I wish him and his team “Stone Soup Soldiers” all the best,” added Mohan.

The film is ready to go on floors with its first story “Crossroadz” in Mumbai starring Avalok Nagpal, Satyam, Soumya Basuthakur, Arunima Jha, Bibin Babu and others. The other four stories are conveniently planned to shoot at all four corners (Mumbai, Delhi, Kolkata, Bangalore) and the final in the heartland of India - yeah in Jabalpur (Madhya Pradesh). The starcast also includes Sangita Sonali, Shaan Roy, Abhishek Biswas, Vilas Rajput and S Venkatesh in pivotal roles.
Posted by Films & TV World at 5:02 PM