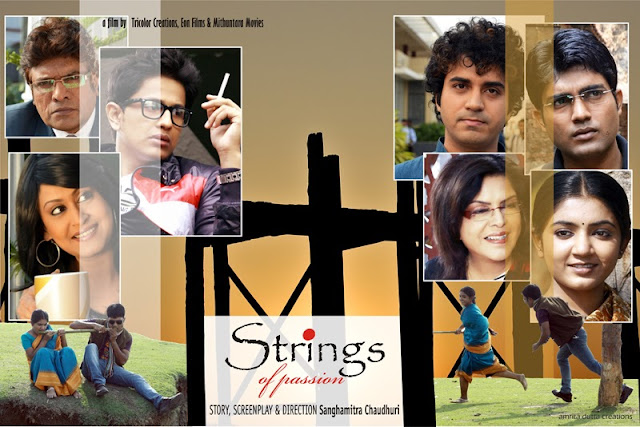 Produced by Tricolor Creations in association with Eon Films and Mithuntara Movies “Strings of Passion” which was scheduled to be released on July 26, 2013 has been pushed further to September 12th due to the untimely demise of Director Sanghamitra Chaudhuri’s husband.

While the other makers of the film were keen to push the film for a mid August release, however, with big budget films like “Chennai Express” and “Satyagraha” releasing back to back, the makers are not finding a suitable weekend until 13th September to release the film. “Being a bit superstitious with Friday the 13th, we are planning to release it a day earlier,” said Mohan Das from Eon Films.

Directed by Sanghamitra Chaudhuri, Strings of Passion has Zeenat Aman, Rajesh Sharma, Indrani Halder, Shubh Mukherjee, Avalok Nagpal, Paru Gambhir, Amit Trishaan and Sangita Sonali in the lead. The film which has already gone to a few festivals and has bagged the Best Film, Best Actress and Two Best Actor Awards has been nominated once again at “The Indian Independent Film Festival” happening from August 15-18 at Bangalore.


“The high quality content of the film always made way for an invitation at festivals for the discerning judgment of the jurors opening up new directions. Trying not to get ahead of ourselves, but we are sure excited to be nominated once again and we are hopeful to emerge with flying colours. While we have already taken home the Best Film, Best Actress and two Best Actor Awards, we would be more than happy if we can bag the Best Director Award. However, the Best Award will be the one that will come from the audience in the theatres,” concluded Mohan Das.
Posted by Films & TV World at 6:35 PM