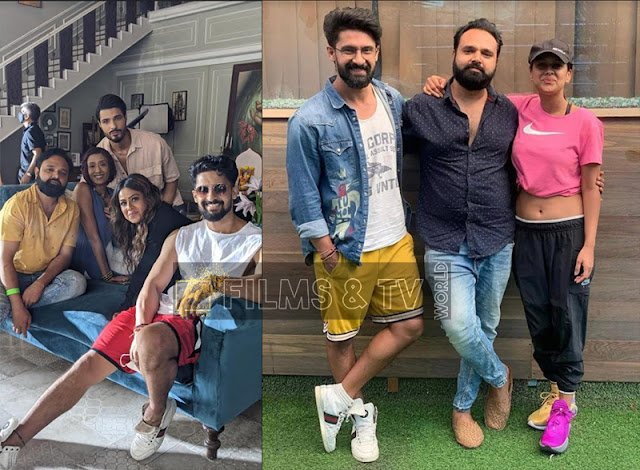 The original leads Ravi Dubey, Nia Sharma &  Achint Kaur in the series, shed some light about their experience of working with director Aarambhh M Singh & how he is actors’ director and gets into every little thing that is part of his frame whether it’s the actors clothing or it is art and set design. He is very precise and particular towards his work & that makes him all over perfect.

Ravi Dubey
For me, it has been a terrific experience working with Aarambhh. This is the first time that I've had the opportunity of working with him. Aarambhh is someone who is really an inclusive creative person, and that translates as a director as well. He is someone who has an open mind about every scene. He used to often say that I know that there are actors who are director’s actors, but I'm an actor's director. I think that's something that's absolutely amazing about the statement. This is what truly makes him an inclusive creative and because he is this way the environment on the sets is really very warm. Aarambhh makes sure there is always that potential to push the envelope and go the extra mile in a scene which may not always necessarily be a part of the script. So to say there's always that window to create a new kind of magic with the scene. So that I think this is Aarambhh's biggest strength. And he is not only a director, I've also enjoyed his company as a friend and I am glad to have met him during Jamai 2.0.

Nia Sharma
Working with Aarambhh  M Singh has been pretty smooth, more than taking his name that's pretty tough. But I would say what is easy is how he lets you be, and gives you the space as an Actor. He just lets you be, lets you flow unless you go wrong somewhere. He does not complain about anything. That's the best part when you can actually be at ease with the director he really understood me on a lot of levels. He was particular about my look, my costumes. He was constantly right there you know, talking to me about things, constantly boosting my moral through the entire show. So I would say overall it was fantastic and I definitely look forward to working with Aarambhh again.

Achint Kaur
Yes about working with my director Aarambhh. So we met for the first time on the show and what I like about Aarambhh is that he is a very sensitive person and that really comes across. When he is directing the scenes, you get to learn a lot. He sees the intrinsic part of every scene and he is super committed. He gets so involved at times I feel that Aarambhh why didn’t you do the scene for me and make it simply beautiful. So this one thing I really like about him. Otherwise he is a great gentleman & a beautiful person. Loads & loads of blessings to him.

Jamai 2.0 Season 2 is one of the most popular and long-awaited web series, and fans are eagerly waiting for their favorite couple, #SidNi to return to the screen. The sequel in the form of Jamai 2.0 continues from the cliffhanger where it left off the last time to make some big revelations.

Director Aarambhh M Singh’s second season builds a relationship with lifelong trials centered on romance. Aarambhh has kept the spice and ‘mystery’ alive till the very end which will make viewers want to binge watch the show till the climax. The transition of episodic series format from daily soap has been done for the better and with the unexpected twists and turns happening one after the other in a jiffy, it keeps you hooked to the screen till the very end.