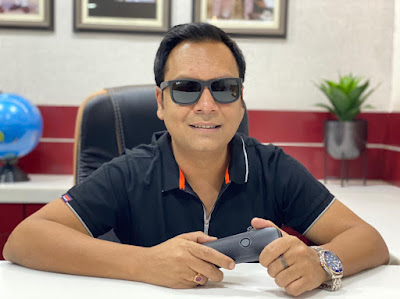 It’s celebration time for  the multi- talented Zeishan Quadri, who never laid his audience down with his work projects & always loved by fans for his performance in the Gangs of Wasseypur saga or in  Revolver Rani & recently released Biccho ka khel, to name a few, has given us some iconic stories and character from Indian Cinema.

Zieshan has always embraced the raw side of his talent with his hard work in all the fields, being a producer, director, and writer apart from acting in films. Zeishan who always surprises with his performances had recently given another hit  to his audiences with Halahal.

Halahal was a digital film by Eros now, which was written and produced by all rounder Zeishan Quadri was appreciated by everyone and got a great response from the audiences. Halahal has been nominated this year under the best web film category not just that it’s also been nominated in best actor and supporting actor categories. Halahal is a fictionalized crime story inspired by true events, featuring Sachin Khedekar and Barun Sobti in the lead roles.  The heart-touching narrative is about a father's journey in search of the truth behind his daughter’s death.

An Eros now film Directed by Randeep Jha and produced by Zeishan Quadri and  Priyankka Bassi, it sheds light on many subjects through its dark yet gritty frames of a charred body on the highway, a corrupt and greedy police officer and the murders of students. When the father senses something fishy in the post-mortem report, he immediately dives in to find out whether his daughter’s death is a suicide or was a murder.

Sharing his joy Zeishan says,"I am very happy to know that our hard work is getting so much appreciation from various places , audiences &  from the industry. And I really want to thank Eros & Ridhima Lulla for giving me much freedom for exploring locations , star cast etc & my friends  Sachin Khedekar ,Barun Sobti & director Randeep Jha also the entire team of Halala who supported us immensely & that why the whole process of bringing a movie like Halahal together was possible and turn out so amazingly & loved by audiences so much. Being the writer and producer I could feel the depth of the movie.

‘Halahal’ - has garnered immense praises from fans and critics  all over the country because of the OTT platforms which has brought that change & revolution in the India Cinema.