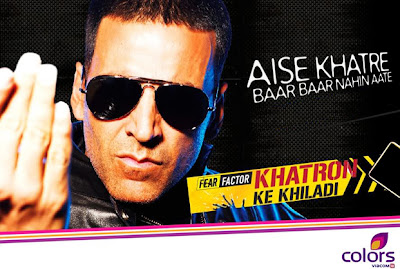 Even as there were news and speculations about Salman Khan hosting the 4th season of the reality show, Fear Factor: ‘Khatron ke Khiladi – 4, the rumours can finally be put to rest. According to our grapevine, it’s Akshay Kumar who will be hosting the 4th season and not Salman Khan as were speculated. It was also speculated that Akshay and Salman both had shot the promo for KKK-4.
According to industry sources, while Salman had shot for the promo at , Akki too had a shoot out for the show’s promo in February for which he went to . But since the shoot is being held at the picturesque locations of , it thus stands ground that Akshay Kumar is finally doing the show.
Perhaps the speculations of Salman Khan doing the show started with Salman’s new found success of Dabangg and the high TRPs of Bigg Boss 4. Though Salman Khan is Hot property on the small screen, according to an insider, the channel is not ready to try their hands at someone different than from their original contender Akshay Kumar. Last time they roped in Bollywood actress Priyanka Chopra and the show hit rock bottom as Hot babe Priyanka did not appeal to the viewers, and the TRPs of the show came to the lowest of all seasons. And this time they just don’t want to take any chances as that could jeopardize their innings. And TRPs ke liye channel kuch bhi karega. The shoot for the show will start by the mid of this month and will continue till May 18 according to confirmed sources.
Posted by Films & TV World at 12:41 AM