FANTASY magazine lifts article straight from this blog and publishes as its own... 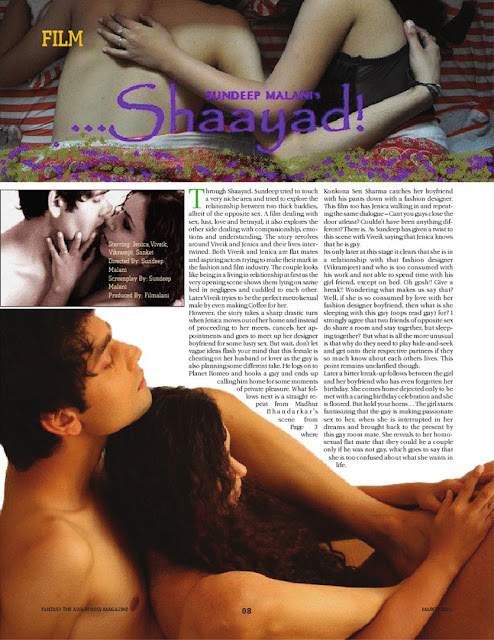 THIS IS NO APRIL FOOL JOKE. ITS REAL!!


As someone who has been a freelance writer for a great number of years now, a problem I have faced many times over is finding people copying my articles and even my blog posts without permission and I have always dealt with them strictly. Simply copying an article written by someone and publishing it is not only offensive but is also plagiarism as you're passing the article as your own when it belongs to someone else. Not only its gross injustice done to the writer but it also tantamount to copyright violation. And anyone dealing with plagiarism must be  taken to task, whoever they might be.
This time I was shocked to see a reputed magazine like FANTASY copying my article on a short film Shaayad - verbatim (word to word) and passing it as its own. Directed by Sundeep Malani, Shaayad is a film dealing with sex, lust, love and betrayal, as well also exploring the other side dealing with companionship, emotions and understanding. Shayad that was premiered in Mumbai at a festival organised by the director on 5th February this year, is the story of friendship between a gay and a struggler. The review on Shaayad was posted on this blog on 11th February
http://filmsntv.blogspot.com/2011/02/tagline-is-just-to-titillate-and-bring.html
(click the link to read) and Fantasy has published the same in this months current issue. (see the picture alongside)
What has left me really puzzled, though, is that if the magazines reporter or their journalist can’t come up with an original piece of article or even a single original sentence - they could have straight away copied the “Press Release” circulated by the producer / director. That wouldn’t have amounted to any infringement of copyright. But here the magazine’s reporter must have found this article appealing and to impress his immediate bosses must have passed it on as own. 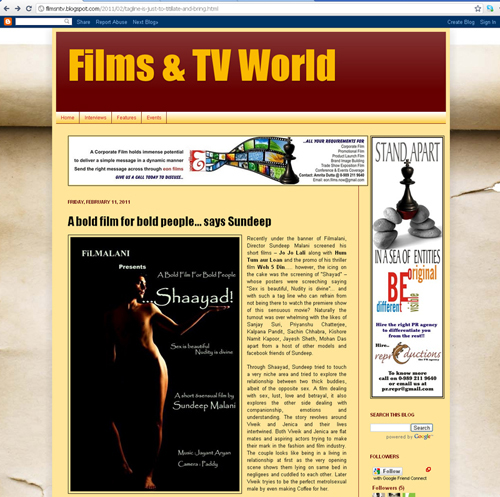 If such reporters cannot piece an article on their own, I wonder why the f&*% do they even need to work and make money as a reporter? They can as well go ahead and write full time for television serials who appreciate such copy paste jobs. Or there are several professions that are a LOT easier than being a writer, and you make much better money from most other professions too. Cos to writers like us, writing is not a profession: it is an obsession. So if they don’t feel that obsessive need to get words down on paper/screen, why don’t they just find another job? My life would be a lot easier if, instead of writing, I was obsessed about the stock exchange or selling cars. And I’d be a lot richer too.
Posted by Films & TV World at 7:07 PM