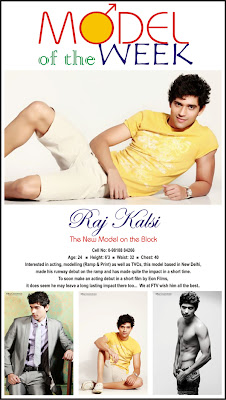 Hardly did we announce that we at FILMS & TV WORLD are starting a new column "Model of the Fortnight" to be uploaded every alternate Friday as a new release, we received loads of response to our announcement. Naturally looking at the huge response, we decided to change it to "Model of the Week", so that we can give more space and mileage to models keen to use this platform to enhance their career,” said Sudeep Das, the creative brain who germed this idea.
This Novel idea really hit the readers and the models alike and we received a terrific response. At the same time, it also caught the attention of all the nitty and gritty that keep on surfing sites to just pick up an idea floated elsewhere and then straight pass it on as their own. Naturally we were not astonished (rather we were wondering) when we found that people running their personal blogsites simply and plainly copied this concept floated on this site. One such blog owner not only straight picked up this idea of this new column "Model of the Fortnight" but even had the cheek to chose to upload it on the same day - Friday as we announced as well mentions that this idea was going on around in their heads for a couple of months. And mind it, when actually this was announced a week back at our end. So much in the name of creativity. Wonder, if they can’t coin and originate a fresh new idea, they better change their service providers and get sum fresh idea.. 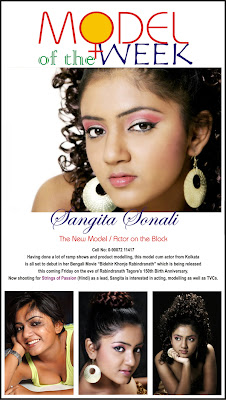 However, keeping in tune with our fresh concept of Friday deliveries, we are going a bit step further now and will be unleashing a new model every Friday as a new release in "Model of the Week" page. Male as well as Female stand a chance to be featured every Friday and be the star of the site for a whole one week, before they are shifted to the archive section.

This week's Male model is "Raj Kalsi" from New Delhi. A new Model on the Block, Raj is interested in acting, modelling (Ramp & Print) as well as TVCs. Making his runway debut on the ramp, he has made quite the impact in a short time. To soon make an acting debut in a short film by Eon Films, it does seem he may leave a long lasting impact there too...

Sangita Sonali who features as our Female Model in the same section is a model cum actress and her debut film in Bengali "Bidehir Khonje Rabindranath" is due for release this coming friday. At present shooting for "Strings of Passion" in Hindi as one of the leads, she is the one to watch out for as she belongs to the intense school of acting on the lines of the Late Smita Patil or the latest Chitrangada Singh. We at FTV wish both Raj & Sangita all the best..
In case you would like to be featured on this page or try your luck being a “Model of the week” in our series, mail your portfolios with your contact details on filmsntv@gmail.com. And ya, no need to get disappointed if you don't find your self in the coming week. Who knows, it might be your turn next... Cheers!!
Posted by Films & TV World at 1:03 AM