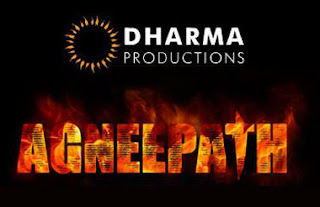 The all new 'Agneepath' which was planned for a Jan 13, 2012 release will now be released on January  26, 2010. This was decided as one of Aamir Khan’s film will be delayed and won’t release on the scheduled date. And with a four day holiday over the weekend, there could have been no better date to release this film. Looking at Bodyguard’s success which released on id and ganapati and have seen a resounding success, naturally Filmmaker Karan Johar is all looking forward to a super hit Agneepath.
Karan's 'Agneepath', a remake of Amitabh Bachchan starrer, is a tribute to his father, filmmaker Yash Johar's 1990 cult film of the same name. Directed by debutant Karan Malhotra, the action-drama will see Hrithik Roshan essaying the iconic character of Vijay Deenanath Chauhan and Sanjay Dutt will be seen as Kancha Cheena. However, this new Agneepath is very different from the original and have some major changes, like the role played by Rishi Kapoor. Coincidentally, Mithun Chakraborty’s role in the original has perhaps made way for the role by Rishi and Rishi has never played so black as in this film. All in all, its worth watching out for going by the promos atleast.
Posted by Films & TV World at 7:34 PM