Can Polygamy be an alternative lifestyle? Watch out on Oprah Winfrey Show 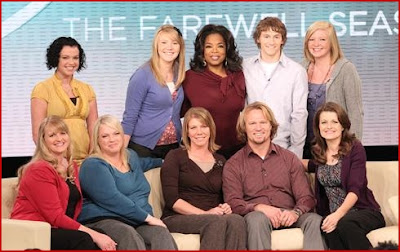 In tomorrow’s episode on Oprah Winfrey Show, September 19, at 8.00 pm on BIG CBS LOVE, Oprah meets a happily married man Kody, who is a polygamist-- instead of having one loving wife, he has four!
Kody Brown seems to have it all! He's a happily married father with 16 children and a good job and a reality television series called Sister Wives. According to Kody, “if you're good with one marriage, they figure you'll be good with two. I hope they think I'll be good with four."
For the past 20 years, Kody has been legally married to his first wife, Meri. After they said "I do," Meri introduced her husband to Janelle, a woman who's lived as Kody's second wife for 17 years. Christine, Kody's third wife, has been part of the family for 16 years, and Robyn, his fourth wife, joined the family just five months ago. For 16 years, Kody, Meri, Janelle, Christine and their 13 children lived together as one big polygamist family. Then, in 2010, they added Robyn, Kody's fourth wife, and her three children to the mix.
Until September 2011, when reality series Sister Wives with the Brown family members came on air, only family members, close friends and a few co-workers knew about the Brown family's alternative lifestyle. Now, millions of people are paying attention...including the local police department.
Janelle also points out to Oprah that she and her sister wives were never forced into plural marriage. "We've all chosen this life," she says. "We are free to choose it." Polygamists Meri, Janelle and Christine Brown, stars of the reality TV show Sister Wives, explain why it's important for their husband, Kody, to have loving relationships with each of them; their bonds with each other and why they decided to do the reality show.
Stay tuned to catch with this happy family on Oprah Winfrey Show, on Monday, September 19, at 8.00 pm on BIG CBS LOVE.
Posted by Films & TV World at 9:58 AM