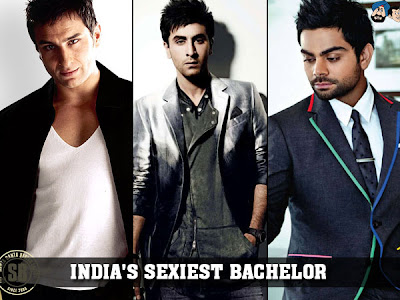 India’s Sexiest Bachelor, the show that brought India’s 10 most eligible men to compete against each other on one platform has reached its final stage. The journey that started with India’s top ten sexy single men has now reached to a stage where one out of top five will be voted as India’s Sexiest Bachelor on Saturday September 10th on BIG CBS PRIME.
The show brought the audience closer to their favourite bachelors. The close and personal encounters with the stars gave the fans an opportunity to know the stars better thus making it easier for them to vote. Finally, the top 5 contestants were revealed last week. They are; the hunk – John Abraham, blue eyed boy – Ranbir Kapoor, versatile actor - Abhay Deol, chocolate boy - Shahid Kapoor and Junior Mallya – Siddhartha.
The show revealed some deep secrets, some memorable moments they’ve had with fans and above all the little known facts about the stars. Some flashing moments that comes to mind in the show were, one of the hottest actors in Bollywood, John Abraham, sharing some of his secret tips to charm a woman; Siddhartha Mallya on how any confident girl can walk up to him and talk to him and Preeti Desai backed her friend Abhay Deol saying that he is the sexiest for her on the list.
After all that was said and done, the big question still remains. Who will be India’s Sexiest Bachelor? Watch out as the five top contenders’ battle for the grand title. The big moment is here; stay tuned to India’s Sexiest Bachelor on September 10th, 10pm exclusively on BIG CBS PRIME.
Posted by Films & TV World at 7:36 PM