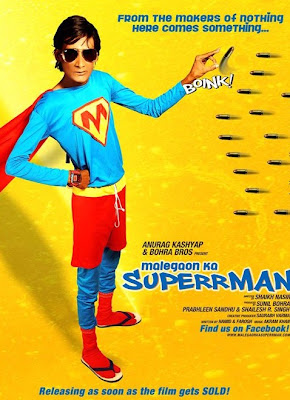 After seeing a specially arranged premiere of his own film with producer Sunil Bohra and Filmmaker Anurag Kashyap, Actor Shafique Shaikh, who is seen fighting against the `tobacco villain` in the low-budget film `Malegaon ka Superman`, died of cancer in his hometown.
Shafique, whose last wish was to see the release of `Malegaon ka Superman` before his death, passed away yesterday morning after attending the specially-arranged premiere of his movie on Tuesday evening.
The 25-year-old actor Shafique, a class-VII dropout, was an essential part of the thriving low-budget film industry in the powerloom town of Malegaon, some 250 kms away from Mumbai. He had acted in various films made in Malegaon like `Khandesh To Goa`, `Khandesh Ki Baraat`, `Khandesh Ka Qarazdar Master`, `Malegaon Ki Lagaan` and `Khandesh Ka Doctor`, among others. It might be interesting to note that the Malegaon film industry produces low-budget films and spoofs of famous Bollywood and Hollywood movies.
Shafique who is survived by his wife and two daughters, was diagnosed with cancer last year and was treated at Tata Memorial Hospital here earlier.
Posted by Films & TV World at 7:30 PM