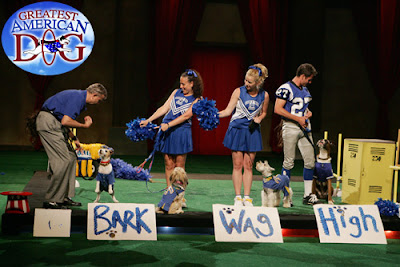 Reality shows are the order of the day. Another reality show, but with a difference! This one is with dogs and their owners. Bull dog, Terrier, Boxer, Labrador, Retriever…more are all here to participate in the first of its kind Canine Reality Show Greatest American Dog .BIG CBS LOVE brings to all dog lovers & animal lovers this dog-eat-dog reality series where 12 dog owners and their pets live in quarters and participate as they compete to see who is the best and the grand prize. The show will have competitors from pageants and from people who have trained their dogs at home. Dogs and their owners will have to survive 40 days of incredible challenges to be named the Greatest American Dog.
Professionally and home-trained dogs will compete against each other for the title. Casting calls for dogs and owners were open to any form of dog talent. Thus agility dogs, talking dogs, hunters, obedience dogs, and musical dogs were all invited to the calls. With such a wide casting call for the Greatest American Dog, all dog owners  made sure they lined up for the show. The challenge is overseen by a panel of three stern judges. At the end of each episode, one pair is sent packing.
The participants will compete against each other in a variety of training challenges, provided by the show that will focus on the abilities of the trainer to ready the dog for each competition. According to a critic,” The dog-and-owner interplay ranges from awesome and comic to the cringe-worthy.”
The final three are challenged in everything they have learned at the Canine Academy. Who will be the Greatest American Dog? Stay tuned to watch this amazing canine reality show Greatest American Dog every Monday at 8pm only on BIG CBS LOVE.
Posted by Films & TV World at 11:49 AM