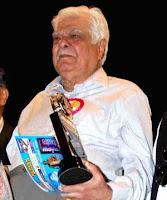 Producer Surinder Kapoor, father of actors Anil Kapoor and Sanjay Kapoor and producer Boney Kapoor, passed away in Mumbai yesterday, September 24. It seems that Surinder Kapoor had gone for a walk in the evening. He came back, drank a glass of water and while he was untying the laces of his shoes, he suffered a heart attack and died on the spot.
Starting off as a secretary to yesteryear actress Geeta Bali, Surinder Kapoor also assisted K Asif in Mughal-E-Azam. He went on later to produce Tarzan Comes to Delhi, Ek Shriman Ek Shrimati, Shehzada. Ponga Pandit, Phool Khile Hain Gulshan Gulshan, Hum Paanch, Woh Saat Din, Thanedarni, Loafer, Judaai, Hamara Dil Aapke Paas Hai No Entry and Pukar. He also produced and directed Bhooka Sher in 2001. He was the president of the Film and Television Producers Guild of India from 1995 to 2001 and was also felicitated with the L.V. Prasad Phalke Award in 2009.
Posted by Films & TV World at 12:07 PM