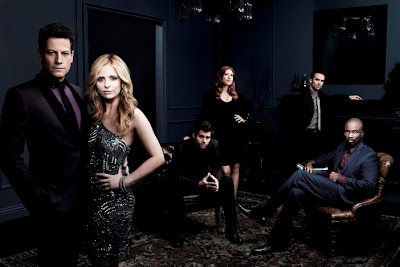 This summer, BIG CBS Love is gearing up to take the temperature a few notches higher…come April, BIG CBS Love - India’s first international entertainment destination for the urban women – will bring to you hit drama series, ‘Ringer’. The series stars award winning actress Sarah Michelle Gellar who shot to instant fame with the television series Buffy the Vampire Slayer. On Ringer, for the first time, Gellar will be playing a double role as she plays twin sisters Bridget Kelly and Siobhan Martin. The show premiers on April 2nd and will air Monday to Friday at 9pm.
The show is a fast paced drama about the two twin sisters. Bridget Kelly (Sarah Michelle Gellar) is a recovering alcoholic and stripper in Wyoming and Siobhan is married into the upper crust of society. Bridget is under the protection of the FBI Agent, having agreed to testify against her employer, the local crime boss, who she witnessed commit murder. Fearing her life, Bridget flees to New York to meet her estranged twin sister Siobhan (also played by Gellar).
With just the right portions of drama, excitement, thrill and more, the show promises to be an instant hit with its audiences. With a multi-media marketing campaign to promote the show – across radio, TV and digitally, it offers an excellent option for advertisers who want to reach out to this plum relevant audience base.
Soon after arriving in New York, Siobhan, who had kept her sister's existence secret from her family, appears to commit suicide by jumping into the ocean. Bridget then assumes Siobhan's identity and tries to fit in among Siobhan's wealthy social circle, including Siobhan's husband Andrew, stepdaughter, best friend Gemma, and Gemma's husband with whom Siobhan had been having an affair. The only one who knows that Bridget is passing as Siobhan is Bridget's Narcotics Anonymous sponsor. Bridget's life becomes more complicated as she discovers that her sister was hiding secrets of her own and that someone is trying to kill Siobhan as well.
So go ahead and make your summers even more exciting with Ringer starting April 2 Monday to Friday at 9 pm only on BIG CBS Love.
Posted by Films & TV World at 11:10 AM