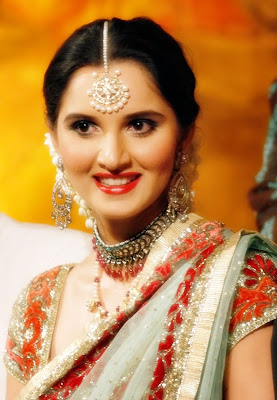 Ace tennis player of India; youth icon of India: star of Indian tennis: tennis sensation: India’s Glam Diva contender…and more. That’s how young Sania Mirza is referred to by millions of her fans and followers all over the country. No stranger to controversies, nothing will keep this ace tennis icon down. From career threatening injuries, Bollywood link ups, and a fatwa against her and of course her scandalous wedding to an already married Pakistani cricket player, Sania Mirza has sailed through it all from strength to strength.
Currently with a drop in her rankings the concerned All India Tennis Association (AITA) is planning to get a wild-card entry for Sania for the singles event at the London Olympics. AITA is keen that Sania competes in the mixed doubles event of the Olympics and for that Sania has to be there in either in singles or doubles draw to be able to compete in mixed event. If Sania manages to be inside top-64 in the singles and top-10 in the doubles, she will get a direct entry.
However, as the country’s  only woman to reach the 4th round of any Grand Slam event and the first Indian to get in top 50 of WTA(Women’s Tennis Association) Sania as the new age sportsperson beat the boys by becoming the most searched sportsperson on Google for two consecutive years. This goes to show young Sania’s popularity and the reason why she is a strong contender on India’s Glam Diva on BIG CBS LOVE.
And just like her dedication to tennis, Sania dedicated herself to the 'Save the Girl Child' campaign as their ambassador for the ministry of health and family welfare. No matter what reason Sania finds herself in the news, this diva attracts controversy like bees to the honeycomb! Like Sania’s grand strokes and shorter than short skirts ruffled a few feathers back home. To this Sania shoots back; “As long as I am winning, people shouldn't care whether my skirt is six inches long or six feet long!"
With her signature short skirts, kajal clad eyes and prominent nose ring, Sania is a tennis player who exudes femininity that makes her so popular both in India and overseas. When she is not on the tennis courts she maintains her strict physical routine by working out at the gym with weights and endurance training. Fitness has been a lifestyle for Sania ever since she can remember and thus plays an important part in her success.
For a young girl who is a sports celebrity, plus a youth icon and a fashionista Sania Mirza has weathered all the highs & lows with strength & grace. To know more about the multi faceted young sports star catch her on India Glam Diva, this Saturday, March 17th at 9.00 pm on BIG CBS LOVE
Posted by Films & TV World at 8:16 PM