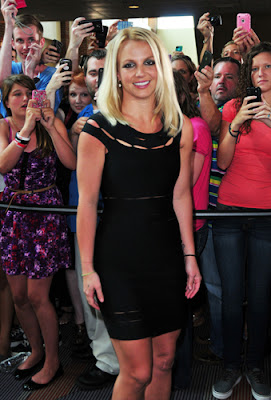 Everybody who missed Britney’s fabulous dancing all this while was in for a treat this Friday. The X Factor judge couldn’t help but bust a move as soon as 20 year old contestant Nick Youngerman performed his version of Vanilla Ice’s Ice Ice Baby for his audition on Friday’s episode of The X Factor which airs in India, every Friday and Saturday at 10PM on BIG CBS Prime, Love and Spark.

The young aspiring singer-cum-janitor’s catchy rendition of one of the most foot tapping tracks got the audience moving as soon as he began his performance. And what would you know, a few seconds into the song, Britney stood up like she can’t help it and started dancing and clapping along with the audience! And that’s not all. After Nick’s performance came to an end, Britney, who has thoroughly enjoyed herself, tells the 20 year old that he is ‘absolutely adorable’ and blows him a kiss. Now that’s called a performance! And Britney surely know how to take the entertainment quotient of this performance several notches higher.

But what was the reaction of the other three judges? Catch Britney’s moves and the other judges reactions on The X Factor, Friday and Saturday at 10 pm only on BIG CBS Prime, Love and Spark.
Posted by Films & TV World at 9:56 AM