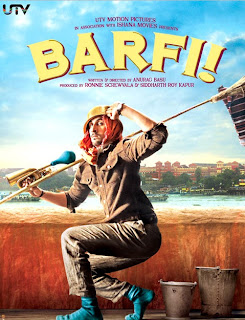 Now this is some "Phataphati" News.. Kolkata and Bangla is gonna get its attention once again after Amitabh’s song in Kahaani as Anurag Basu unmuted Ranbir Kapoor and mad him sing in Bangla & Hindi for Barfi.. The promotional song titled Phataphati or Awesome in Bangla, starts off in Bangla and continues in Hindi.

All set to become the Kolaveri di, the song is being unveiled today on youtube as part of its internet campaign and will be as well on television from Saturday onwards. Since Ranbir plays the title role of a deaf and dumb boy  Barfi in the film, it will be interesting to see how it is placed in the film. However, director Anurag Basu has made it clear that it wont be played during the end credits as its not a viable option.

The song which has turned to be awesome (phataphati) also has Anurag and music composer Pritam contributing to the vocals.

Anurag Basu who is known for his multilayered characterization as seen in ‘Life in a Metro’, ‘Gangster’ and ‘Kites’ demonstrates his hold on the subtleties of a character in this film. After all, ‘Barfi’ is very important for himto defend his place among today’s sought after directors. The trailer that was released earlier does suggest the presence of dark traits in Barfi’s character. Thus all this added expressions are being pumped in Ranbir’s character with well defined nuances to give it that extra edge and not fall flat in the expectations of the viewers. But all said so, Barfi is sure going to be a cult film - massively different from the deaf mute Koshish or Khamoshi for sure.