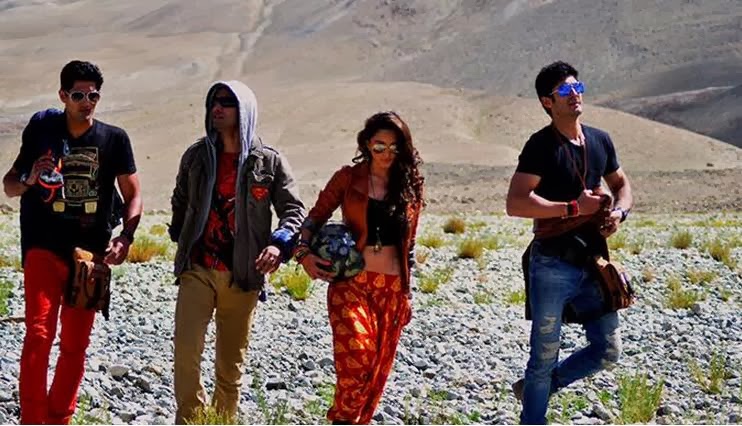 Fugly, a youth entertainer produced under Akshay Kumar and Ashvini Yardi’s banner Grazing Goat Pictures starring Mohit Marwah, Vijender Singh, Arfi Lamba and Kiara Advani is buzzing and will have viewers on the edge of their seat. The abuse rabbits suffer on Chinese fur farms is real and gruesome that's why the talented quartet jumped at the chance to shoot a brand new ad campaign for People for the Ethical Treatment of Animals (PETA) India encouraging their fans to stay away from angora fur and wool. The ad shows the four stars sitting together with an angora rabbit next to the tagline "Fur Is Worn by Beautiful Animals - and Ugly People". Their point? That PETA Asia's undercover video shot on fur farms in China – the source of 90 per cent of the world's angora fur and wool– shows rabbits screaming in pain as workers violently rip the fur out of the rabbits' skin.

The shoot took place during FUGLY’s film promotions in Mumbai as the stars are gearing up for the release on the 13th June 2014. The ad was shot by ace photographer Gaurav Sawn. Asif Ahmed did the hair, and makeup was done by Adrian Jacobs. The outfit and styling were the work of Taaneeyaa Oak.

Says Vijender Singh, "PETA Asia investigation found workers violently ripping the fur from the animals' sensitive skin as they scream in pain. Rabbits are in shock, having their fur plucked out."

"The rabbits who have their fur cut go through an equally brutal process. They are under a lot of stress", explains Kiara Advani "Not only does this make them struggle to get out of the situation and go through pain and stress, it's extremely traumatic, terrifying."

Adds Arfi Lamba, "Rabbits are kept in tiny filthy cages surrounded by their own waste. These cages offer very little protection from natural element. And then they spend their entire life in these cages, where these thin wires cut into their sensitive footpads."

Concludes Mohit Marwah, "Angora fur also known as angora wool is found in scarves, jackets, and more including those sold in India. Please stop using fur and wool and stop cruelty against animals."

After their fur is yanked out, the rabbits are left in shock, able only to lie motionless inside their tiny, filthy cages. After they endure this process every three months for two to five years, their throats are cut and the skin is ripped from their bodies.

Rabbits who have their fur cut or sheared also suffer: During the cutting process, their front and back legs are tightly tethered – a terrifying experience for any prey animal. All the rabbits spend their solitary lives in barren wire cages that harm their sensitive feet. They're denied solid flooring, bedding, and the companionship of other rabbits. PETA Asia's investigator visited nine angora fur farms in China, where there are no penalties for animal abuse on rabbit farms.


PETA encourages consumers to read garment labels and to put garments that contain angora fur, wool or any other animal derived ingredients back on the rack.
Posted by Films & TV World at 9:00 PM