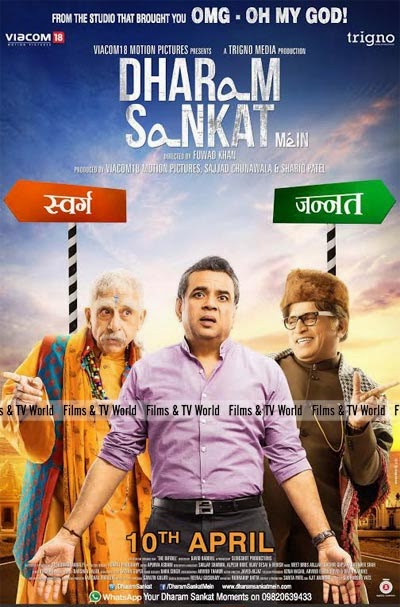 Dharam Sankat Mein, is a Hindi Bollywood drama film by Viacom 18 Motion Pictures, the studio which produced the film Oh My God. The film directed by Fuwad Khan starring Naseeruddin Shah, Annu Kapoor and Paresh Rawal has launched its second poster today. Dharam Sankat Mein is an official Hindi adaptation of British satire 'The Infidel'. It revolves around a Hindu man Dharampal (By Paresh Rawal), who goes through an identity crisis when he discovers he was adopted as a child, and was born to a Muslim family.


The film stars 3 National Award winning actors, Naseeruddin Shah, Annu Kapoor and Paresh Rawal in a comic role. The music is composed by Meet Bros Anjjan, Sachin Gupta, Jatinder Shah while lyrics are by Kumaar. The movie is all set to release on 10th April.
Posted by Films & TV World at 9:29 PM