This REPLAYY is not of a RE-PLAY value! 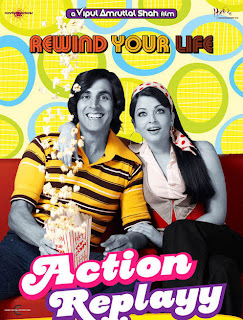 'Awaaz..... Neeche' shouts the Khiladi Kumar in the film. Point to be Noted. For the first time, you get to see the Bollywood Biggies and Heartthrobs - Akki and Ash PLAYing Parents to a College Going Boy! This Old couple is 'Not Made For Each Other' as they have their own differences, even after their long not-happily married life. Akki spends more time in Kitchen - cooking and Ash spends more time in malls - shopping! Its Woman who wears the Pants and the Man who sobs! And the son, who is scared to marry his fiancée, as he assumes that he would also end up being an example like his parents. He wants his parents to be 'made for each other'.
With a time machine of a Antony Gonsalves Scientist, he goes back to the past in 1975 and we get to see Akki and Ash of the era of Rajesh Khanna and Mumtaz. The screen becomes a festival of colorful extravaganza, cliché bellbottom pants, Mumtaz Flowers, Sharmila Wigs, Zeenat Aman glasses and the entire scenario goes back to Old Bollywood! Its that era, where the son who also lands up is all set to transform his father from a silly guy to an eligible bachelor and his mother from a tomboy into the soft beautiful girl next door and make the two fall in love with each other. And this despite all odds (Om Puri and Kirron Kher get to PLAY the comedy baddies). And to give twist - there is Ranvijay and Neha Dhupia too! And what role they PLAY in the film. Ahem! Ahem!!! Are you really interested? What happens at the climax is definitely predicted.

The humour is neither sharp nor slapstick and alternates between so many amateurishly-edited scenes that you would purposefully not try to even find the loose ends. ACTION REPLAYY falls flat and is good and humorous only in parts. With Elvis Presley and a old Medley music to entertain - get Nostalgic, If you like the word 'Old is Gold'. Ash looks tired and overacts and Akki looks bored and does not reacts. And their performance falls flat. There is hardly some Action in this PLAY! (This actually is inspired from a Gujrati Play of the same name) Its Roy Kapoor who plays the son is a new talent to watch! And I am referring to 'watch' your time as he gets more screen presence in this Akki-Ash film. So, you would actually want a Time Machine to Stop or Pause at times, instead of Re-PLAYing it. Its Action Neeche (thumbs down) for this REPLAY, which is (for sure) not of a RE-PLAY value! I would not watch this film for the second time. I wished I could take my PSP at the multiplex to PLAY with at times when I wasn't interested to see the boring yawning scenes in the film! And once out of the theatres, you invariably start singing "Zor Ka Jhatka.. hai Dheere se Lagaa!"