“Bidehir Khonje Rabindranath” to brush shoulders with other archive films based on Tagore's stories... 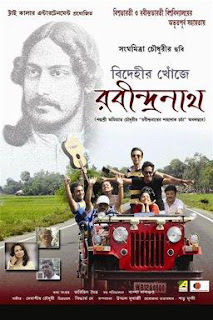 This Saturday, May 7, marks the 150th birth anniversary of Rabindranath Tagore. And to commemorate the Nobel laureate, the Government of India is coming out with a special collection of six DVDs titled Tagore Stories on Film. Apart from five films based on the writer’s stories, the collection also includes two documentaries, one by Satyajit Ray and the other by Tagore himself.

At the same time, director Sanghamitra Chaudhari is releasing her new Bengali offering “Bidehir Khonje Rabindranath” this Friday to commemorate the same. Going one bit further in paying her tributes, the film was shown yesterday to a select gathering of friends from Media and the industry alike with professionals from various other fields at Tagore’s Jora Shanko Thakurbari at Kolkata. Sanghamitra says, “This is in a way my paying tribute to Tagore. Though the film is not based on any of his stories, it is rather based on an essay “Rabindranather Parolok Charcha” by Prof. Amitabha Chaudhuri.”
Meanwhile, NFDC is releasing a compilation of Tagore’s short films on a DVD which includes the cinematic adaptation of Rabindranath Tagore’s short story “Kabuliwala” along with Tapan Sinha’s “Khudito Pashan”, Satyajit Ray’s “Teen Kanya”, and Kumar Shahani’s “Char Adhyaya”. However, as per informed sources Char Adhyaya did not see the light of the day as the director and Rabindra Bharati had major differences on the way the story was filmed.
“These films will be released in DVD format as part of the 150th birth anniversary celebrations of Tagore this year. The audience needs to see these iconic films in the new formats,” says NFDC managing director Neena Gupta, who has undertaken the project under the direction of the Ministry of Culture.
To be priced at Rs 399, this DVD set will also contain “Natir Puja”, a silent film directed by Tagore himself. Most of these were lying in film archives across before NFDC decided to restore them last year. The documentary ''Natir Puja'' is a compilation of the available footage of a silent film that was directed by Rabindranath Tagore himself. This was the only film where Tagore was directly involved in the production. Shot over four days on the occasion of his 70th birthday, the film features Tagore himself in an important role.
Another documentary that finds its way in the DVD set is the one made by Satyajit Ray, in 1961, to celebrate Tagore's 100th Birth Anniversary. The documentary titled “Rabindranath Tagore” details the life and work of the celebrated Bengali writer who was awarded the Nobel Prize for Literature in 1913 “because of his profoundly sensitive, fresh and beautiful verse, by which, with consummate skill, he has made his poetic thought, expressed in his own English words, a part of the literature of the West.”
"Bidehir Khonje Rabindranath" revolves around a group of college students who join documentary filmmaker Abhijit (played by Abhishek) and accompanies him to Santiniketan to research on Tagore. During the course of the research, the youngsters develop an interest in Rabindranath and learn a lot about him,” says Director Sanghamitra Chaudhuri. This group of five college students are today’s Genx kids who are hardly aware of Rabindranath Tagore. As the film progresses, due to a strange twist and turn in the events, these five guys end up doing a film the way they come to know about Rabindranath.” She also added that she is a huge Tagore fan and this film is her tribute to the poet on his 150th birth anniversary. With Abhishek Chatterjee and Anshuman Gupta in the lead, it also stars Sourodeep Ghosh, Arpita, Sangita Sonali, Indrani and Abhinandan Dutta.
Apart from the films based on Tagore's stories that are making its way into the DVD, another story of Tagore that was filmed was Tagore’s “Jibito-O-Mrito” that had Shabana Azmi essaying the character of Kadambini in a 5 part film - Daughters of this Century. This Tapan Sinha directed “Kadambini” was produced under the banner of Shunya Communications. it also marked the comeback of Jaya Bachchan after a hiatus of 16 years, albeit in a story by Sarat Chandra Chattopadhyay.
At the time of going to press, another film based on Tagore’s story “Nauka Dubi” which was also scheduled to be released is now shifted to a later date due to certain indifferences between the director Rituparno Ghosh and the producer Subhash Ghai according to reports.
Posted by Films & TV World at 10:08 AM